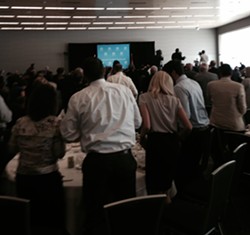 Sam Allard / Scene
Standing O for Yellen!
No fireworks to report in the prepared remarks of Federal Reserve Chair Janet Yellen, who spoke this afternoon to a packed house at the Global Center for Health Innovation.

Yellen's talk marks another major national get for Dan Moulthrop and the City Club in 2015. They hosted President Barack Obama earlier this year.

Yellen spoke generally about the growth of the U.S. economy in the wake of the Great Recession and about ongoing slack in the labor market.

In terms of anything resembling breaking financial news, she did confirm that the Fed will likely raise interest rates by the end of 2015.

"I expect that it will be appropriate at some point later this year to take the first step to raise the federal funds rate and thus begin normalizing monetary policy," the white-haired chair declared. "But I want to emphasize that the course of the economy and inflation remains highly uncertain, and unanticipated developments could delay or accelerate the first step."

But the national media was fairly unimpressed:

Janet Yellen repeats everything she's already said a million times, no change in tone whatsoever http://t.co/qqotdLshbi wait for the Q&A


In the traditional City Club Q&A, Yellen responded to a young woman who asked about women in the field of finance.

"There has never been a time of greater opportunity," she said, and stressed that mentorship will be key to ensure the ongoing success and promotion of women in the field.

At the program's conclusion, the crowd expresses their gratitude with a standing-O.