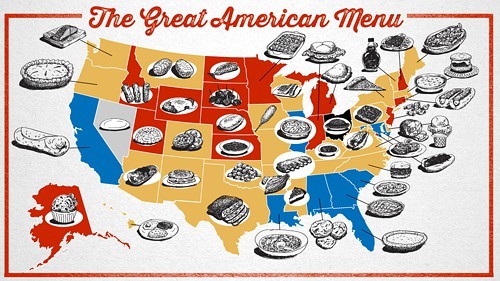 In a popular new online trend, editorial staffs cobble together state-by-state lists for a given topic. Most recently, Slate assembled something called the "United Sports of America;" shortly thereafter, Deadspin published "The Great American Menu." Both lists assign one item per state while using that item only once across the board. For example, Ohio would never be assigned "High School Football" as its state sport in Slate's list because anything other than Texas would seem like sacrelige.

Anywho, these lists tend to be wildly appealing to national audiences because people can sort of jaw about the relative injustice of their selections, and — certainly in the Deadspin piece — complain about the rankings.

I feel like I'm not describing this very well. But the point is — and feel free to carry on in the comments below — we got mightily shat upon in both lists.

For Ohio's state sport, Slate "controversially" selected CORNHOLE. This was its justification:

The beanbag-tossing game, which some believe arced into existence in Cincinnati, has softly descended into bars, frat houses, picnic areas, tailgates, and backyards nationwide. The Ohio-based American Cornhole Organization holds an annual world championship, which drew players from around the country to the greater Cincinnati area this July.

However, there's a sense in which Ohio, with the cornhole selection, becomes the ultimate state for sports fans. Ohioans love sports so much that we've invented a sport to pass the time while waiting for other sports. And the sport we invented has become our state sport. We love all sports equally (often in unrequited fashion) and the cornhole selection honors that devotion. Does that take any of the edge off?

The Deadspin list is much more damning because it actually ranks the state menu items. In the final (lowest) tier, writer Albert Bernako saw fit to rank Ohio's "Cincinnati Chili" below "Being Hit By a Car." Notwithstanding the questionable food selection, Here's Bernako's write-up in its entirety:

For the mercifully unacquainted, "Cincinnati chili," the worst regional foodstuff in America or anywhere else, is a horrifying diarrhea sludge (most commonly encountered in the guise of the "Skyline" brand) that Ohioans slop across plain spaghetti noodles and hot dogs as a way to make the rest of us feel grateful that our own shit-eating is (mostly) figurative. The only thing "chili" about it is the shiver that goes down your spine when you watch Ohio sports fans shoveling it into their maws on television and are forced to reckon with the cold reality that, for as desperately as you might cling to faltering notions of community and universality, ultimately your fellow human beings are as foreign and unknowable to you as the surface of Pluto, and you are alone and always have been and will die alone, a world unto yourself unmarked and unmapped and totally, hopelessly isolated.

But wait! This abominable garbage-gravy isn't just sensorily and spiritually disgusting—it's culturally grotesque, too! What began as an ethnic curio born of immigrant make-do—a Greek-owned chili parlor that took its "Skyline" name from its view of the city of Cincinnati—is now a hulking private-equity-owned corporate monolith that gins up interest in its unmistakably abhorrent product by engineering phony groups of "chili fanatics" to camp out in advance of the opening of new chains, in locations whose residents would otherwise see this shit-broth for what it is and take up torches and truncheons to drive it back into the wilderness.

Whatever virtue this bad-tasting Z-grade atrocity once contained derived from its exemplification of a set of certain cherished American fables—immigrant ingenuity, the cultural melting pot, old things combining into new things—and has now been totally swamped and consumed by different and infinitely uglier American realities: the commodification of culture; the transmutation of authentic artifacts of human life into hollow corporate brand divisions; the willingness of Americans to slop any horrible goddamn thing into their fucking mouths if it claims to contain some byproduct of a cow and comes buried beneath a pyramid of shredded, waxy, safety-cone-orange "cheese."

Cincinnati chili is the worst, saddest, most depressing goddamn thing in the world. If it came out of the end of your digestive system, you would turn the color of chalk and call an ambulance, but at least it'd make some sense. The people of Ohio see nothing wrong with inserting it into their mouths, which perhaps tells you everything you need to know about the Buckeye State. Don't eat it. Don't let your loved ones eat it. Turn away from the darkness, and toward the deep-dish pizza.