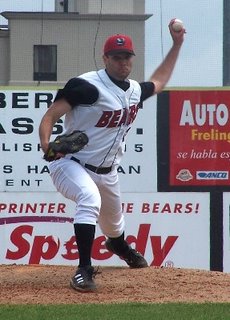 When the season's in the shitter and your team is so far removed from contention that it would take a set of Chris Bando goggles to even glimpse third place, you have to expand your interests if you want to stay semi-excited about your sad-sack losers. Sure, there's prospects that you hope to see, emerging everyday players who've held up their end of the bargain, hot dog races, fireworks, bobbleheads, and more. There's also the flotsam that washes onto the roster when injuries, demotions, cuts, and general ineptitude take their toll.

The Indians have now used over 20 different pitchers in relief this year, and that number is sure to climb. Can't remember most of them. Don't care to, actually.

Which is why I first shook my head at the news that the Indians had picked up R.J. Swindle off waivers. I didn't know much about him, considered him just another junk arm the Tribe would use to bide the time until the season mercifully comes to a close.

Then I read Rob Neyer's blog about Swindle. We'll get to the actual baseball numbers in a second, but those aren't what grabbed my interest. This is:

Nashville's R.J. Swindle has been hammered in a couple of quick trials in the majors (first with the Phillies last season, then with the Brewers this season). But he's left-handed and he throws a pitch I don't think I've ever seen before, a sidearm curveball that clocks around 50 on the radar gun. You really have to see it to believe it, and I hope you get the chance (you should, based on Swindle's numbers anyway).

Anyone that throws a pitch slower than one of Doug Jones' many change-ups is definitely okay in my book.

Now the numbers, which, Neyers claims should allow Swindle a shot in the major leagues, be it here or somewhere else.

Does the Swindle have any sort of future? Obviously, the prospect mavens don't believe that he does. It seems that Cleveland's front office might disagree. I believe that anyone who can post a 1.43 ERA in 82 Triple-A innings — with superb K/BB and HR ratios — has a legitimate shot at being a useful reliever in the majors. No matter how hard he doesn't throw.

When your philosophy on accumulating pitchers in your organization goes from "Drafting and grooming" to "We screwed the drafting up royally" to "Wow, we have no pitching depth" to "Holy shit, let's just grab every pitcher we can and see what sticks" there's definitely room for a guy that throws a 50mph pitch.

Hell, that might be one of the most interesting things to happen to this club in a long time.