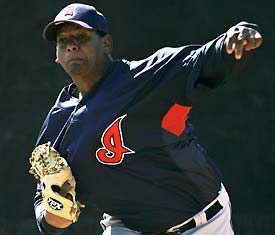 Indians.com beat reporter Anthony Castrovince wrote a nice profile of Juan Lara, the Tribe minor leaguer who almost died after a vicious auto accident. Lara, now back at work throwing the baseball, has come a long way since his medically-induced coma and extensive surgeries, but obviously has a long way to go still. Most importantly, he's healthy, committed, and thankful for what he has. Great, uplifting, read. Here's just a snippet:

The halo was removed in August 2008, and Lara felt human again. He picked up a baseball for the first time since the accident. Although he was still too weak to throw it, he wanted to see what it felt like in his hand again.

In December, at home in the Dominican, Lara asked his brother, Josi, to play catch with him.

"I felt fine," Lara said. "I just felt a little sore. I still remembered how to pitch. What you learn when you're younger, you don't forget."

The Indians didn't forget about Lara. They monitored his progress and, upon hearing about his games of catch, offered him another Minor League deal and the opportunity to rehab at their new complex in Goodyear. It wasn't a baseball decision, though the Tribe certainly wouldn't object to having another left-handed relief option in the upper levels of their system. It was done primarily to show Lara that he was still part of the Indians' family.