No Merlot for You 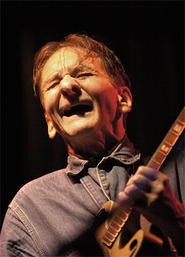 Walter Novak
Glenn Schwartz: Undercover sources reveal he was actually happy last week.
If you're lucky enough to have California wine shipped directly to your doorstep, be warned: You only have a few days of freedom left.

On October 1, a new state law will ban large wineries -- those producing more than 150,000 gallons a year -- from shipping directly to Ohio customers. Which means you can kiss your Napa Valley wine-club memberships goodbye. Thank-you cards can be mailed to our alleged leaders in Columbus.

Until a few years ago, out-of-state wineries were barred from selling directly to Ohio customers, allowing liquor stores to take their cut. But in 2005, the U.S. Supreme Court ruled that this was "like totally unfair." It forced Ohio to level the playing field. Let the sweet nectar flow!

Unfortunately, freedom didn't last long. Upon further reflection, free-market Republican Matthew Dolan decided that whole free-market thing kinda sucked. Since few Ohio wineries produce more than 25,000 gallons a year, he decided it would be best to force you to buy out-of-state wines at the liquor store. After all, what's the point of capitalism if no middleman is taking a cut?

This summer, Dolan's provision was slipped into the state's annual budget bill, and it passed with flying colors.

We're pretty sure the campaign checks that Dolan and Governor Ted Strickland received from the Wholesale Beer and Wine Association had nothing to do with this. No, our leaders would never betray the People's Freedom to Drink. Would they?

James Frey, new & improved
A year after publishers changed the labeling of James Frey's notorious memoir, A Million Little Pieces, from non-fiction to fiction, the Shaker Heights native is back with another "novel," which reportedly sold for $2 million.

Bright Shiny Morning is set in Southern California, but since no one is depicted as the coolest, badest guy on the planet, it surely can't be an autobiography. (Not that his last book was, um, either.) Still, his publicists are once again painting Frey as a lovable, tragic literary desperado with one fatal flaw (in this case an "active imagination") who ultimately redeems himself.

Whether the book has $2 million worth of happy endings won't be determined until it arrives on shelves next year.

Elf dissed again
Iowa Senator Tom Harkin's Annual Steak Fry is the place to be for Democratic presidential hopefuls. Last week, the sun was shining, the meat was sizzling, and more than 12,000 people showed up to picnic and meet the candidates.

It's the kind of event Congressman Dennis Kucinich never dares to miss. After all, he'd show up for a plane crash if there were cameras. But the good congressman was apparently omitted from the guest list.

Organizers only extend the invites to candidates active in Iowa. The Elf, on the other hand, prefers to "campaign" in more exotic locations, like Hawaii and California. Last week, he opened an office in Las Vegas, hoping to capture the all-important bachelor-party vote.

In true Dennis fashion, he issued a biting press release before the event, arguing, in essence, that other candidates are even bigger jokes than he is. Connecticut Senator Chris Dodd registers only 1 percent in the polls, and he got invited, Kucinich whined. "Instead of spending millions of dollars on high-priced consultants and slick advertising, we have a highly motivated grassroots organization," Denny announced, referring to the three guys at Record Exchange who are totally into his stance on Phish.

Yet as angry as he was, Kucinich apparently thought that boycotting a picnic was a bit extreme. He sent volunteers to set up a table, but that plan was also railroaded by a grand conspiracy. Team Denny got shoved to the far end of a field by the button and T-shirt vendors, according to one blogger who attended.

Damn it, Harkin! If the Elf isn't wanted in Iowa, he'll just have to take his federal matching funds where they're appreciated. Look out, intimate coastal towns near Santa Barbara!

Where's the hate?
Every Thursday, barflies flock to Hoopples to be intermittently serenaded and damned to hell by the World's Greatest Guitarist to Sleep on a Mattress in His Brother's Basement™, Glenn Schwartz. Mix Johnny Cash's voice, Jimi Hendrix's fingers, and Pat Robertson's itch to preach loudly and offensively, and you've got the best free show in the Flats -- outside of being a bouncer at Diamond Men's Club.

But last Thursday, Hoopples patrons found an impostor in Schwartz's place. Yes, this guitarist was still toothless, blinking madly, and wearing his trademark denim suit. And he still clawed at his instrument with the fury of Moses. But this time -- and here's where it gets weird -- Schwartz seemed happy.

He grinned like a jack-o'-lantern and only berated the audience twice. When a woman in a short skirt stood near him -- a capital offense at a Schwartz show -- he didn't even launch into his patented "harlots and hellfire" diatribe. "Tighten yourself up, follow a righteous path, and don't dress that way," he simply warned her.

Punch was this close to smashing a Labatt over the impostor's face and peeling off his latex mask, when a clean-cut blond guy leaned over and enlightened us. "We're with his church group!" he beamed, pointing to a table of eager young men. "He always gets happy when we're here!"

Have no fear, readers. The church group won't be at this week's show.

Salsa alarm!
Painesville police recently found the words "South 13" and "Sur 13" spray-painted on a ramp. They suspect the graffiti -- which references Mexican gangs -- could just be the work of pranksters. But they're also concerned that graffiti across town indicates the presence of the Taco Mafia.

Though the farming and nursery labor of immigrants may be the only thing keeping Painesville alive, some longtime residents -- who prefer to see the town rot in peace -- don't quite appreciate their presence ["The Superior Americans," July 18]. So the cops aren't taking any chances. They've cried out to Washington, hoping to swap pictures of the graffiti and a few random tattooed guys for $75,000 to investigate.

Which means the real problem, says Veronica Dahlberg of Hispañas Organizadas de Lake y Ashtabula, is nothing more than the city's ongoing frustration with its shifting demographic. "This is just another attempt to demonize immigrants," says Dahlberg. "There are no gangs in Painesville."

If there were, she'd probably know. This summer Dahlberg spent time in El Junco, the rural Mexican farming community where many of Painesville's immigrants come from. There weren't any gangs there either, she insists -- just acres of sweet potatoes, corn, watermelon, and soybeans.