No News Is Bad News: Reading This Paper Could Save Someone’s Life 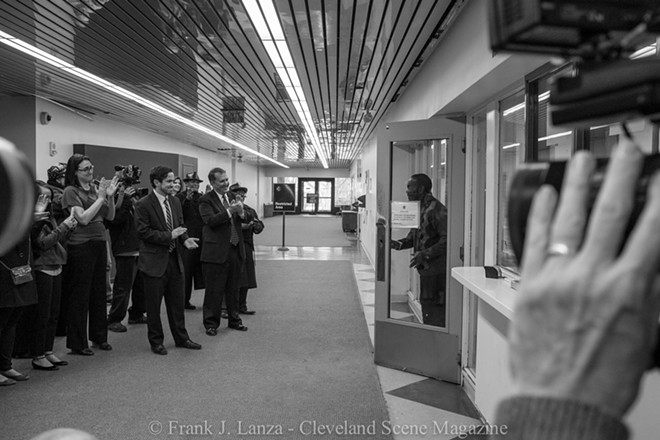 Rickey Jackson's first steps of freedom in four decades
This is the second in a series of essays from readers/supporters reminding you to join the Scene Press Club.

No, this article has nothing to do with COVID-19, even though it is on all of our minds in one way or another.

I would like to think that the pandemic has taught us to be thankful for what we have – our health, our loved ones, our jobs, our freedoms, our futures. But the longer we are confined, even to our own homes, the more we tend to move away from appreciation and toward fear, frustration, depression, and anger.

You can’t really imagine it. It seems beyond anything more than a dystopian plot in a novel or movie. But if you could, you have some very small understanding of what it is like to be one of the thousands of Americans who are wrongfully imprisoned for crimes they have not committed.

Despite their innocence, they are locked away, stripped of almost all freedom, choice and autonomy. Locked away, unable to see children and siblings and parents and friends except through barriers far more sinister than the Plexiglass shield at your local convenience store.

Those Americans include your neighbors here in Cleveland.

In less than 20 years, the Ohio Innocence Project has successfully represented 30 Ohioans who were convicted of crimes they did not commit, for which they collectively lost nearly 600 years of their lives. More than half of those people were wrongfully convicted in or near Cleveland.

At OIP, we work hard on our cases. It is demanding and draining work, consuming every bit of our funding and most of our time, emotion, and energy.
We have a talented legal team, made of lawyers who once prosecuted cases or worked in big firms or legal services organizations. And sometimes we have luck. To paraphrase one of those lawyers, “There are a million reasons why a wrongful conviction happens, and a one in a million chance of ever proving it and exonerating someone who is innocent.”

One of the times that we enjoy good luck and good fortune is when a journalist is looking at the same things that we are. Time and time again, reporters at the Scene have spent weeks or years on a case, gathering critical facts, finding and interviewing witnesses, reviewing police reports and court files and public records. Their experience, intelligence, common sense, and dedication are invaluable. They often help us find that one in a million chance.

Kyle Swenson, formerly at the Scene and now a staff writer at The Washington Post, devoted himself to learning the truth about the Rickey Jackson, Wiley Bridgeman, and Kwame Ajamu case. The three friends had been wrongfully convicted of murder in 1975, spending time on death row and the next forty years in prison. Swenson started investigating the case in 2011, and his reporting in Scene about the truth led to further investigation and, ultimately, freedom in 2014.

A couple of years later, Eric Sandy wrote a compelling article about a wrongful conviction case involving Laurese Glover, Eugene Johnson, and Derrick Wheatt, three men often known as the East Cleveland Three. Arrested as teenagers and tried as adults for murder, these men spent 20 years in prison despite their innocence.

Mr. Swenson and Mr. Sandy then wrote about Ru-El Sailor, devoting countless hours to clear coverage of his complicated case, conviction, 15 years behind bars, and freedom, including his marriage on the steps of the Cuyahoga County Courthouse, the same courthouse in which he had been wrongfully convicted.

More recently, Vince Grzegorek reported on a Cleveland judge ordering a new trial for Isaiah Andrews, who has spent the last 42 years in prison for the murder of his newlywed wife. Isaiah was convicted of the crime despite clear evidence linking the murder to another man, but that critical evidence was withheld from his defense attorneys by the prosecutors. (The judge hearing the case has granted a new trial and released Isaiah from prison because he is 82 years old and at high risk for COVID. The Cuyahoga County Prosecuting Attorney objected to DNA testing and may appeal the decision granting the new trial for Isaiah.)

The reporters, writers, editors, and staff at the Scene work hard on their stories, spending countless hours and emotional and intellectual energy. Journalism, like law, is demanding and draining work.

The journalists at the Scene do not just help us. They help you.

Journalists help you understand what went wrong. Sometimes it is deliberate misconduct which, for better or worse, may not shock you. But far more often and probably more surprisingly, wrongful convictions occur simply because we are human and we make mistakes. Simple mistakes that sometimes have enormous consequences. And honest, innocent people think those mistakes will be discovered and that they will be freed, only to learn that no one likes to admit mistakes, even when it means someone else’s freedom.

Journalists help you be better citizens, voters, and jurors by illustrating the tragedies and triumphs of how your court systems and the elected people in them.

Journalists help you understand that men like Rickey and Ru-El and Laurese and Derrick and Eugene and Isaiah have more strength, resilience, grace, and kindness than you will ever find in most humans.

Journalists help you understand these men have families they love, who suffered along with them, and who now dream of better lives for their kids.

As we all dream of whatever the new normal may be in this time of pandemic, don’t stop appreciating your freedom.

Don’t stop appreciating your loved ones.

And don’t stop appreciating all of the folks who take care of you when you’re sick, serve you meals and stock your groceries when you are hungry, and write the stories that keep you educated about how to save people’s lives, including those of your neighbors.

Click here to make a one-time or monthly contribution to the Scene Press Club.