Did a small village try to run Jehovah's Witnesses out of town? 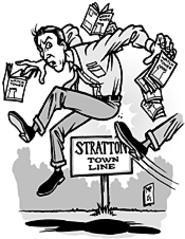 Mark Poutenis
One day in 1998, four Jehovah's Witnesses pulled up to a stop sign in the village of Stratton. A man came up to their car and started shouting.

"He said they were not allowed to be in the town, that people moved to Stratton with the understanding they would not be bothered by Jehovah's Witnesses, and that if they were men, he would put them in jail," their lawyer says.

Who are you? one woman asked. The man was John Abdalla, the town's mayor.

Under village law, the Witnesses needed a permit to preach door-to-door, and the mayor could regulate them like any other salesmen. So the Jehovah's Witnesses sued the little village 80 miles southeast of Cleveland, claiming the statute violates their freedom of speech and religion rights.

This fall, the U.S. Supreme Court announced it will hear the case. Across the country, armies of relentlessly nice missionaries are watching to see if they'll soon need permission to spread the Good News. Meanwhile, the town of 300 people on the border of West Virginia is standing guard against strangers trying to sell snake oil or God.

Stratton hardly seems like a breeding ground for constitutional drama. Resident Marie Allen says her friends call the close-knit village a modern Mayberry. "It's a little bit of heaven." More people are retired than working, and neighbors look after Stratton's numerous widows. Many houses overlook the Ohio River. "We can watch the big boats come right up," Allen says. "We wave to them, they wave to us."

But a sign at the village limits warns solicitors: Before knocking on a door uninvited, they have to give the mayor their name, address, previous addresses, the name of their organization, and their reason for soliciting. Then they get a list of all the residents who don't want them around. Until a court stopped them, Strattonites could fill out a checklist to let village officials know who they did and did not want stopping by -- the Campfire Girls? Trick-or-treaters? Politicians? Jehovah's Witnesses?

Like everyone who has hidden in a back room when the well-dressed Watchtower ladies come calling, some Strattonites say they're glad the law keeps Witnesses at bay.

"I don't know that I want anybody to come preaching to me at my door," growls Jefferson County Sheriff Fred Abdalla, the mayor's brother. "I have my own church, my own religion."

"I don't think they have a right to try to push their religion on people," complains retiree Donald Brooks. "I have the right to say who solicits at my house." Brooks filled out one of the forms, allowing police and firemen to ask for donations and Girl Scouts to sell him cookies. But Witnesses weren't invited.

"I've dealt with these people when I lived in another community down the river," he says. "They keep coming back. Finally, I told the man to get off my porch before I threw him off."

Yet residents insist Stratton's law doesn't target Jehovah's Witnesses. They say it applies to everyone knocking on doors, guards privacy, and protects the elderly from scams. Sheriff Abdalla is full of tales about shysters he's run out of Jefferson County: crooked water-softener peddlers, a Cleveland attorney who charged old people 10 times the going rate for drawing up wills, and people who pretend to be salesmen so they can get in a house to steal.

"I think [the law] keeps the older people safe," says Allen. "Even younger people are very susceptible to people who say things that sound good and aren't true."

Frank Bruzzese, the village's lawyer, says he rewrote the ordinance after the Witnesses complained, but the church sued anyway. He says it doesn't violate anyone's free speech. "The ordinance does not regulate what you say. It regulates feet that are entering private property uninvited."

But Susan Gellman, a Columbus lawyer helping with the Witnesses' case, says the law is a naked attempt to nudge missionaries from town. "Every time someone has an opinion that annoys [others], they decide their activity annoys them."

To the Witnesses who drive in from nearby Wellsville, Stratton's law is an unnecessary restriction on their spiritual calling. "It violates our religious beliefs to obtain a permit to preach," says Paul Polidoro, a New York lawyer and Jehovah's Witness who represents the Wellsville congregation. "This says that the government gets to know who's talking to who about what." (A man at Wellsville's Kingdom Hall refused to comment, referring all questions to Polidoro.)

In February, a federal appeals court upheld Stratton's ordinance in a 2-1 decision. But next year, the Supreme Court will consider whether the Witnesses have a right to preach without registering.

Church followers have a long history of seeking Supreme Court protection because their beliefs (preaching in public; refusal to recite the Pledge of Allegiance) often offend others. Gellman points to the stop-sign confrontation with the mayor and to his testimony that no one in Stratton wanted to hear the Witnesses' "so-called gospel."

Yet Bruzzese furiously insists Stratton treats everyone equally. He says the mayor's alleged statements to the female preachers are a misquote. Mayor Abdalla won't discuss the case. But it's clear he thinks Stratton supports his fight. "I've been mayor close to 30 years. The people are happy, and they're all behind me."