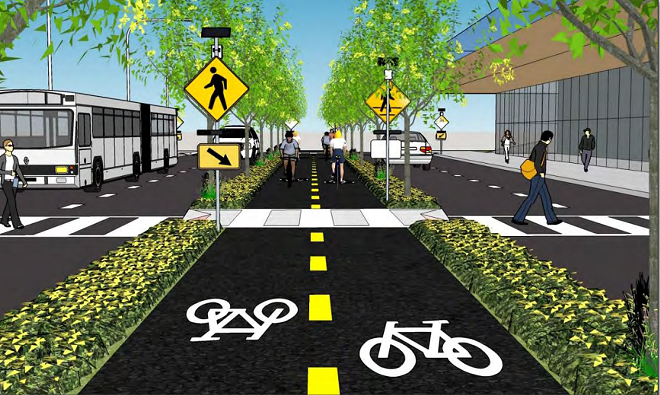 In news you may have missed from late last week, the Northeast Ohio Areawide Coordinating Agency, a planning agency that delves out state and federal funding for regional transportation projects, announced major, multimillion dollar funding for two dedicated, protected bike lanes. It's yet another recent development giving hope to bike and transit advocates that Cleveland, whose long and storied history of ignoring or otherwise screwing up bike infrastructure has long been derided, might actually be making serious progress.

The details: $8.3 million for the first leg of a dedicated bike lane running down Superior Ave. from Public Square all the way to East 55th St. The "Midway" would eventually constitute a 50-mile series of bike-only pathways down the middle of some of Cleveland's most spacious streets. Construction is planned to begin in 2020.

$6.1 million for the Lorain Avenue Cycle Track, running along Lorain Ave. between West 20th and West 45th on the north side and then switching to the southern side of the street between West 45th and West 65th. Construction there is expected to begin in 2022.

Bike Cleveland and other groups have long sought dedicated bike lanes in the city, something Cleveland has been admittedly slow in adopting. While the NOACA funds won't cover the full costs of the projects, it's a major step that's been widely celebrated and welcomed, especially in the broader context of where NOACA is allocating funds. In Friday's announcement of $47 million for 21 projects, the agency has put more focus on equitable planning for non-car households — $33.5 million of that total is earmarked for projects oriented toward transit, bike and pedestrians

"We are just starting to catch up now," councilman Matt Zone told the Plain Dealer. "I appreciate the urgency that's starting to happen with thought leaders like [NOACA Director] Grace Gallucci and NOACA. Even Mayor Jackson is beginning to come around."