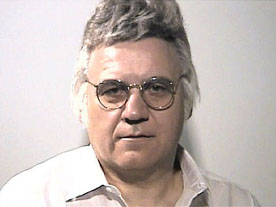 It was back in 2002 that the Mahoning Valley Scrappers hosted one of the most inspired minor league promotion in the history of the game. Jim Traficant, who was heading to federal prison on an array of charges, was the inspiration for, naturally, Jim Traficant Night. It was in August and just after Traficant entered federal prison that the Scrappers paid homage to corruption, bad weaves, and Youngstown's hero.

Let's go to the videotape:

Those wearing a toupee — which Traficant did — or showed proof of being a son of a truck driver — something Traficant repeatedly called himself — didn’t have to pay for a ticket to that game. Of the 4,597 fans at that game, 99 got in for free.

During the game, the team played some of Traficant’s famous phrases over the public address system, had a mock congressional election that Traficant won, and had Traficant impersonators being chased by those dressed in FBI attire.

Well, Traficant is about to get sprung. His over seven-year sentence winds down on September 2, and the Scrappers once again planned a night built around the rug-wearing rapscallion. They didn't want to go over the top this time, though, so they simply were going to announce that Traficant was out, and maybe play some video clips on the scoreboard.

The people of are having none of that.

Response has been so negative that the Scrappers are thinking about canceling the festivities. Apparently hosting a night centered around the release of a convicted felon isn't going over too well. Apparently some people think the team's "celebrating" the end of Traficant's stay in the penitentiary.

The typical call to the Scrappers’ front office about the event, Smith said, is: “I can’t believe you’re doing something to glorify Jim’s release.”

Jordan Taylor, the team’s assistant general manager, added: “We’re getting calls from people thinking we’re doing this huge recognition, which really isn’t our intention. The impression is we’re honoring him, which is hardly what we’re doing. We’re acknowledging his release.”

I mean, if they're honoring anything, it's just the hair. Right?

So, anyway, please call the Scrappers and tell them to not scrap the Traficant Release Night. Please. Balance out all those overreacting hypersensitive people who are demanding we not celebrate this great man. There's no amount of corruption, bribery, tax evasion and lying that a little baseball can't fix.