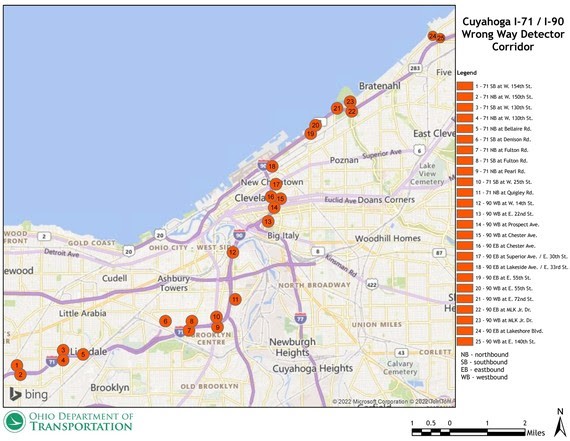 ODOT announced this week it will install a wrong-way detection system, which will include additional signage and 50 device locations at 25 locations along a 22-mile stretch of I-71 and I-90 from West 150th St. to East 140th St., next year.

The system, like the first one built in 2019 in Cincinnati, features sensors at specific on and off ramps that trigger flashing "WRONG WAY" lights if a vehicle proceeds in the wrong direction, with subsequent detectors that sense whether the vehicle has failed to turn around that trigger further flashing warnings. If those are deployed, an alert from ODOT is sent to local law enforcement.

Since being installed, the Cincinnati system has drastically reduced local wrong-way crashes, which while a rare occurrence on Ohio roads — 0.01 percent of accidents — are 40 times more likely to be fatal.

The stretch of I-71 and I-90 was selected after an analysis of wrong-way crashes across the state from 2016 to 2019, along with data on crashes that involved alcohol and the number of bars within a quarter mile of problematic on-ramps. The stretch, it shouldn't come as a surprise, has seen numerous severe and deadly wrong-way crashes in recent years.

“Improving safety for people who live, work, and travel in our state is a top priority for Governor DeWine and me,” ODOT Director Jack Marchbanks said in a statement. “This technology is already helping reduce the number of drivers traveling the wrong way on I-71 in Hamilton County since its installation more than two years ago.”

The system will cost $1.8 million and installation will begin in 2023.

“This project is an important step forward in reducing wrong-way crashes by adding an extra layer to alert drivers they’re driving in the wrong direction,” District 12 Deputy Director John Picuri added. “Once constructed, we will evaluate the effectiveness of this system and determine if other corridors in northeast Ohio could benefit from a similar system in the future.”