"It's a when, not an if," especially after the GOP sweep in Ohio Supreme Court races 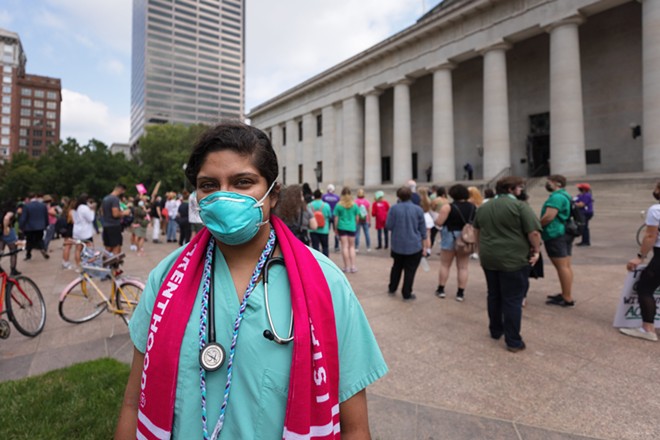 (Photo by Graham Stokes for the Ohio Capital Journa)
COLUMBUS, Ohio — Shreekari Tadepalli is a medical student at OSU. When asked how she wants to practice medicine she quickly answered “I want to be an abortion provider.” She joined supporters of safe and legal abortion at the Abortion Justice Day of Action rally at the Statehouse.

When Republicans swept all three races for the Ohio Supreme Court on Tuesday, they swept away hopes that the court would find that the state Constitution protects the right to an abortion.

So on Wednesday, abortion-rights activists were strategizing over when and how to get a measure on the ballot that would amend the Ohio Constitution to specifically say abortion rights are protected.

“It’s a when,” said Kellie Copeland, executive director of Pro-Choice Ohio. “It’s not an if.”

In the wake of a June 24 U.S. Supreme Court decision overturning Roe v Wade, a 2019 law took effect in Ohio that prohibited the vast majority of abortions after five or six weeks of pregnancy — a point at which a third women don’t yet know they’re pregnant. Almost immediately after the law took effect came reports that a 10-year-old rape victim had to leave the state for an abortion. Others had to as well in the face of serious medical and emotional hazards.

When Ohio abortion clinics raised those hazards in court, a Cincinnati judge temporarily stopped enforcement of the law, agreeing that it violated provisions in the Ohio Constitution. However, Ohio Attorney General Dave Yost, a Republican, is appealing the decision and it’s expected to make its way up to the state Supreme Court early next year.

Some abortion-rights advocates had worked for three pro-choice Democrats running for seats on the court in an attempt to produce a majority sympathetic to its position that abortion rights are already protected by Ohio Constitution.

“For us, this is not just about politics,” Copeland said. “We’re trying to make sure women have basic bodily autonomy.”

But politics worked against the advocates on Tuesday. Republicans won all three races handily.

“The results of the Ohio Supreme Court election were incredibly disappointing and will have an impact on our ability to keep abortion accessible and legal here in Ohio,” said Lauren Blauvelt-Copelin, the vice president of government affairs and public advocacy for Planned Parenthood Advocates of Ohio. “Unfortunately, the three (Republicans) who were elected have made it clear that they have already decided this case.”

When it’s seated next year, the Republican majority on the court seems poised also to uphold a near-total abortion ban should the legislature pass one in its lame-duck session later this year.

However, developments Tuesday in neighboring states might light a path forward for the advocates. In Michigan, a ballot measure that would build abortion protections into that state’s Constitution passed by a 56-44 margin.

Michigan doesn’t restrict abortions nearly as severely as Ohio does. But there were fears that after Roe was overturned someone would try to reimpose a 1931 ban that was still on the books.

During the 11 weeks Ohio’s abortion law was in effect after June 24, women from Ohio flooded into Michigan abortion clinics, creating long wait times and straining resources there. But the easy passage of the Michigan ballot measure means that at least one state will continue offering abortions at least until there’s another successful effort to change the Michigan Constitution.

Outrage over the U.S. Supreme Court decision overturning Roe has manifested in other state elections. In August, voters in conservative Kansas turned back an effort to remove abortion protections from that state’s Constitution by a whopping 18 percentage points.

And on Tuesday, voters in another neighboring state, Kentucky, considered an abortion measure. As with the measure in Kansas, it asked voters to declare that the state Constitution did not protect abortion rights, virtually foreclosing anyone from going to court to stop abortion restrictions.

Public polling has shown Kentuckians to be relatively opposed to abortion, but Tuesday’s measure failed by a full five percentage points.

The victories for abortion-rights activists appear to be part of a national trend. An NBC exit poll on Tuesday showed that abortion was the top concern for 27% of voters in all groups. That was a close second only to inflation at 31%. For 33% of women, abortion was the biggest issue, followed by inflation for 28% of women.

But there’s a lot of work to be done — and money to be raised and spent — if advocates hope to even get a measure on the ballot.

An initial petition must get more than 1,000 signatures and the petition must be approved by Yost, the attorney general who’s in court trying to re-impose Ohio’s abortion restrictions.

Then more than 400,000 signatures  have to be collected from across the state. They will have to be reviewed and approved by the secretary of state. Any disputes over them will be decided by the same Supreme Court that the advocates say have pre-judged the abortion issue. Then the Ohio Ballot Board will write the ballot language.

Only then can advocates even start their effort to get a majority of voters to support a constitutional amendment protecting abortion rights.

On Tuesday, the advocates wouldn’t talk about a timeline.

“We’re not going to say that,” Copeland said. “Coaches don’t give out the plays in advance.”