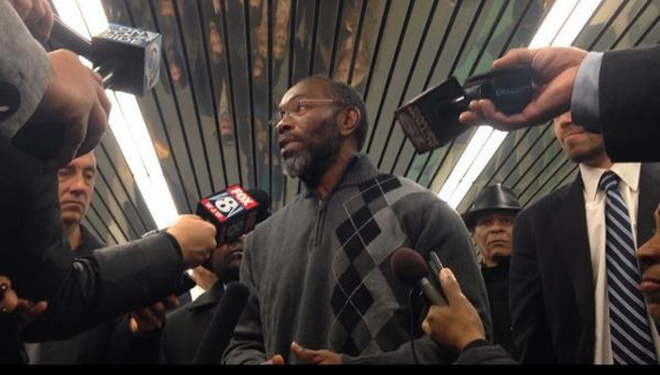 Frank Lanza
Exonoree Ricky Jackson on the day he was released from prison
One corner of the proposed 4,500-page Ohio budget is actually drawing cheers from criminal justice reformers. Tucked into the massive proposal now being debated in Columbus is a provision that would expand payouts for Ohioans wrongfully convicted for crimes they didn't commit. The move would actually make the Buckeye state one of the most progressive on the question. But pushback is coming from prosecutors around the state. Cleveland.com has the details.

The proposal would knock down a number of the roadblocks standing between a wrongfully convicted individual and financial compensation. Currently, an inmate is not eligible for money from the state unless he or she is no longer facing criminal charges related to the case. If you've spent any time reading up on wrongful conviction, you probably know that often these cases take forever to litigate; prosecutors are often extremely reluctant to grant a full exoneration even when evidence clearly stacks up in favor of the accused. That leaves the exoneree without financial compensation until the state finally says 'uncle.' This would shorten that time period.

The new budget proposal would also open up financial compensation to individuals who gave up false confessions and were later exonerated; under the current Ohio provisions, these people are not eligible for compensation.

The full financial scope of the proposal isn't exactly clear at this point. Currently, wrongfully convicted individuals are eligible for $52,625 per year of incarceration, plus lawyer's fees and lost wages. The proposal would up that figure to a higher annual number.

Pushing against the proposal are Ohio's prosecutors, who argue the subject should be addressed in its own bill, not as part of the big picture appropriations project. But Rep. Bill Seitz, the Cinncinnatti Republican responsible for the original wrongful conviction compensation legislation, is moving forward with the current proposal.

"As a conservative Republican, if it were you who had languished in prison for years because the state failed to obey and adhere to your constitutional rights and you had just lost 10 to 20 years of your life when you had no business being there, you would actually think the amount of compensation we're offering is not enough," Seitz told Cleveland.com.