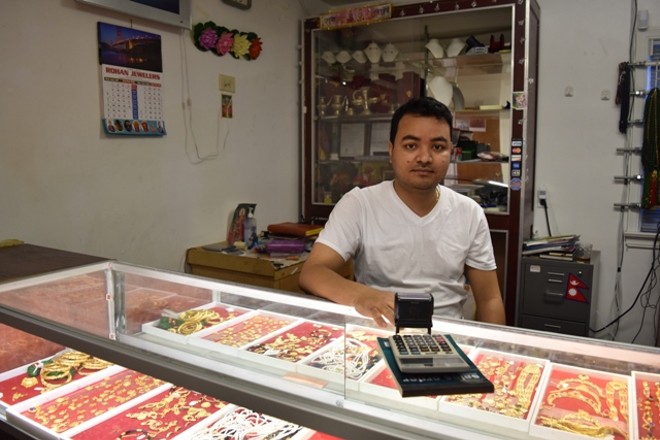 Srijang Laoti Subba opened Family Groceries with his brother and nephew in Akron in 2011. It began solely as a family business but soon, more employees were hired to accommodate the steady flow of customers.

The store, located in the city's North Hill neighborhood, offers a diverse mix of Nepali, Burmese, Thai, African and Hispanic groceries, along with other items. The Subbas, who immigrated from Bhutan, also added a produce section, meat market and mini eatery in the rear of the building.

"We thought of bringing this stuff together to bring the community together," Subba said, weaving through the aisles and pointing out the store's best-selling cookies and beauty products.

Subba, 42, said there was a scarcity of jobs when he arrived in 2009, but immigrants have cultivated the area, and they keep coming, spawning a healthy competition among the local businesses.

The store's success led them to open a second location in Cincinnati three months ago and hire an entirely new team of employees.

Subba and his brother, Naresh, a nuclear physicist, are examples of immigrants who contribute to the talent base of Ohio. Across the state, cities are strategizing solutions to keep immigrant populations afloat and prosperous despite growing concerns about immigration policies.

"I think that the activity in Washington has definitely raised the level of concern in immigrant communities, and it has made us more aware and more watchful of what is going on because we are committed to retaining immigrants in our region," said Mary Stagaman, senior inclusion adviser for the Cincinnati USA Regional Chamber.

Ohio currently is home to more than 500,000 immigrants who paid $4.4 billion in state and local taxes and contributed $11.7 billion in spending power to its economy, according to the bipartisan group New American Economy. The group represents more than 500 business executives and mayors who support immigration reform.

Its "Map the Impact" project shows immigrants represented 11.8 percent of Ohio's science, technology, engineering and mathematics (STEM) workers in 2016, despite accounting for only 4.2 percent of the state's population.

"The immigrants that we're attracting in the Cincinnati market are disproportionately more educated than the native population, so they bring a lot of, for instance, STEM technical degrees into our region that are necessary to fill jobs that we have available," Stagaman said. "They are increasingly more of our physicians, they are increasingly more of our engineers."

Along with the Great Lakes Metro Chambers Coalition, a group of 40 chambers of commerce across the Rust Belt, New American Economy released a report in October 2017 that said the number of immigrant entrepreneurs increased by 120,000 from 2000 to 2015, while the rate at which native-born Americans opened businesses went down. Immigrants also accounted for more than one of every five "Main Street" business owners in the region, which generated about 239,000 jobs for blue-collar, U.S.-born workers.

Annie McFadden, deputy chief of staff for Akron Mayor Daniel Horrigan, said immigrants are an "economic force" in the city, with many introducing culturally oriented businesses and revitalizing run-down neighborhoods, including in Akron's North Hill.

"They pay taxes here, they buy products here, they open up businesses here, they contribute to our labor force and consumer spending," McFadden said. "They also tend to increase our housing values because they tend to buy and rehabilitate houses in Akron."

Joe Cimperman, president of Global Cleveland, a nonprofit economic-development group that promotes immigration, said a lot of the immigrants in Ohio are of prime working age, between 25 and 54, a factor that further contributes to their willingness to find jobs.

In the Great Lakes states, about 70 percent of the foreign-born population are people of working age, whereas the U.S.-born population had about 51 percent, according to the New American Economy report.

"The examples of the benefit of not only welcoming immigrants, but allowing them to do what they do, which is to start businesses, to hire people, is one of the things that troubles me so much about our national policy. ... If we really are trying to put our nation first, the way to do that is not by closing the door or building a wall," Cimperman said. "That is the exact opposite way to do it."

By helping key Ohio cities reverse population loss among native-born citizens, immigration is a "demographic lifeline" in the Rust Belt, according to a recent study from the nonpartisan Chicago Council on Global Affairs.

"For the cities of the Midwest," said study author Rob Paral, a demographer and nonresident fellow at the council, "restricting current immigration levels is the last thing they need: an unnecessary tourniquet applied to a precious supply of new regional residents and workers."

Pete Gerken, president of the Lucas County commissioners, said immigrants helped offset the loss in his county of U.S.-born citizens. Toledo's overall population experienced a 12 percent decrease between 2000 and 2014, along with a 12.7 percent decrease of those born in the United States. The foreign-born population, however, saw a 14.6 percent boost, he said.

Gerken said the immigrants coming to Toledo are skilled, family-oriented and have a strong work ethic, but need a safe and welcoming place such as what his community can provide. The influx of people, he said, provides an economic advantage and increased population growth to the area.

"Even those people that may not like the politics of immigration ought to look at the bottom-line economics of it, if that's what they need to get supportive of it, because it is a factor in our economic growth," he said.

Dayton City Commissioner Matt Joseph said the anti-immigrant attitudes of the Trump presidency and changing immigration policies at the federal level are frustrating.

"We need folks to help us rebuild," Joseph said, "and the very people who are doing that are the people the federal government is trying to keep out - just really dumb."

In Cincinnati, Stagaman said she's hearing a lot more concern for personal safety. Legal immigrants who have worked in the country for years, she said, are feeling worried for themselves and their extended families.

Ohio's major cities - Akron, Cleveland, Columbus, Cincinnati, Dayton and Toledo - have welcoming initiatives in place, meaning they're prepared to take in any immigrants who want to come. The six largest cities are members of the Ohio Welcoming Initiatives network, formed in 2015 to strengthen local efforts to sustain immigrant populations statewide.

Additionally, Dayton was certified by Welcoming America, a nonprofit immigrant advocacy group, as the nation's first "welcoming city" in September for its immigrant-friendly actions that began in 2011.

Joseph said restrictions are something the nation has seen time and time again through history. But setbacks are temporary, he said.

"People realize immigrants are needed; immigrants are vital; immigrants are a part of our heritage," he said. "In a short amount of time, through one mechanism or another, people will figure out that it's the best thing for our city and state to have refugees and immigrants here to join us and become Americans."

Binod Gajmer spent 17 years in a refugee camp in Nepal before coming to the United States, where he and his brothers opened Akron's Rohan Jewelers in 2013. His brother, Bhakti, makes all the pieces himself. In January, they opened Ration Convenience Store next door.

This collaboration is funded in part by Media in the Public Interest and the George Gund Foundation.