An attorney with the Ohio Supreme Court Office of Disciplinary Counsel on Thursday filed a complaint with the Ohio Board of Professional Counsel accusing Geauga County probate and juvenile court judge Timothy Grendell of misconduct in various cases and issues.

The 61-page filing largely centers on Grendell's actions and orders in 2019 involving two teenage boys who he sent to juvenile detention for refusing to visit their estranged father, who the boys had accused of abuse. The case drew nationwide attention and condemnation, including from local officials.

A Lieutenant in the Geauga County Sheriff’s Department, for example, was so discomfited at the time that he penned a memo to his staff advising that in the future, verbal orders from the judge would be insufficient justification for dragging kids to jail.

"The only times we should be taking juveniles into custody or to Portage is when we have had direct involvement with a juvenile via an unruly or delinquent issue and have [probable cause] for a charge and we contact the Judge directly for placement and he orders the juvenile into custody, we have an arrest warrant or written court order in hand...” the memo read. “In this above-mentioned incident, we had no charges and no [probable cause] for the lock up, simply the judge’s verbal order, which is not enough."

Thursday's complaint also takes Grendell to task for a case that also drew nationwide headlines: In 2020, he issued an order expressly preventing two children from being tested for Covid-19, alleging that the mother in the case was using Covid as an excuse to avoid abiding by an order allowing visitation rights to the father.

Referring, in a hearing in the case, to the coronavirus as the “COVID-19 panic-demic,” the judge said: “Pardon me for being a little skeptical when I’ve got 15 or more women coming in here, some guys, saying that they shouldn’t go see their other parent because of COVID-19."

He ordered his constable to physically take the children, one of whom was at Akron Children's Hospital, and deliver them to their father. 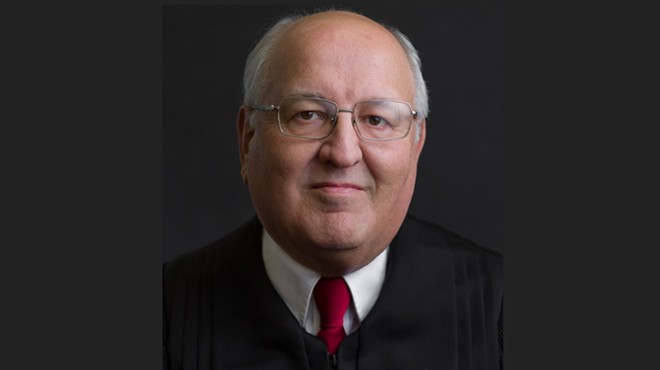 Contempt of Court: We Need to Talk About Geauga County Judge Timothy Grendell

While Grendell's history of beefs with the Auditor's Office is too lengthy to detail here, the ODC accused the judge of improper behavior by intervening in the investigation of two of his employees on trespassing charges by threatening the police chief and by talking about the then-ongoing case at a Tea Party event in which he accused Walder and others of various crimes and coverups.

Rounding out the complaint, the ODC alleges Grendell abused his position by volunteering to speak in 2020 at a statehouse hearing for House Bill 624, introduced by his wife, which accused Ohio officials of blowing the pandemic out of proportion. His participation violated a judicial conduct rule that bars judges from voluntarily appearing at a public hearing of an executive or legislative body and one that says a judge shall not "abuse the prestige of judicial office to advance the personal or economic interests of the judge or others."

Grendell has until Nov. 30 to respond to the complaint and could face punishment by a panel appointed by the Ohio Supreme Court that reviews disciplinary cases.

For his part, Grendell strenuously denied the allegations in a statement issued yesterday.

"The Complaint is without legal merit, reflects a lack of understanding of Ohio juvenile law and procedures, and contains many factually incorrect allegations that are 2 years old and older," it read in part. "Judge Timothy Grendell followed the law, protected children, spoke truthfully, and exercised his constitutionally protected free speech rights, especially as they pertain to protecting public confidence in the court. Judge Grendell violated no ethic rules and looks forward to the opportunity to prove that ALL of his actions were proper and ethical."