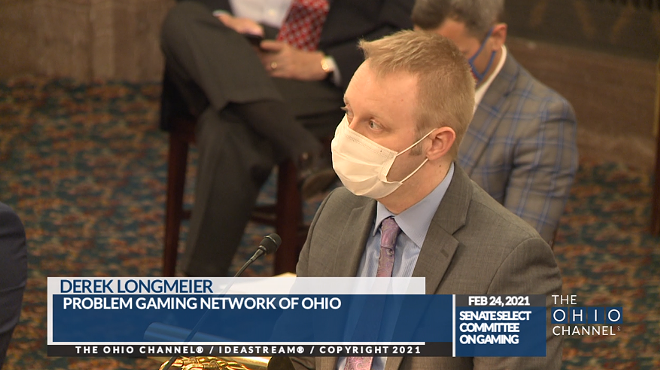 Screenshot from The Ohio Channel.
Derek Longmeier, executive director of the Problem Gambling Network of Ohio, is seen testifying at the Senate Select Committee on Gaming in February 2021.

The economic benefits of sports-related activity continue to get mixed reviews from Ohio economists.

In a survey released this week, 10 of 23 academic economists said they believed the economic benefits of legalized gambling on sports would outweigh the costs. Four said they expected costs to outweigh the benefits and the other nine were uncertain.

The survey was conducted by Scioto Analysis. In a survey last month the same panel overwhelmingly panned the idea that spending on sports stadiums is a smart thing to do with taxpayer funds.

Opinion was more closely divided on the question of sports betting, which the Ohio General Assembly approved earlier this month and which Gov. Mike DeWine is expected to sign into law. The bill sets a Jan. 1, 2023 deadline for legalized sports betting to begin in the state.

Such gambling has reportedly generated tens of millions of dollars in tax revenue in states that already have legalized it. But some of the Ohio economists who were surveyed warned that there will be downsides.

“Tax revenue and job creation would be some of the economic benefits,” Lake Erie College economist Faria Huq wrote in the comment portion of the survey. “However, there would be social costs due to the addictive nature of gambling which would disproportionately affect lower income households.”

One economist said he’d have to know more before he could decide whether legal sports betting is good for Ohio.

“If gambling brings in revenues from suckers in other states, that would benefit Ohio, and it would be beneficial if it is merely replacing illegal gambling and gambling money that Ohio suckers are sending to other states, but it wouldn’t be an economic benefit if it just replaces other less-addictive forms of entertainment in the state,” Jonathan Andreas of Bluffton University wrote. “I don’t know enough about the current situation to guess.”

Meanwhile, Michael Jones of the University of Cincinnati said it would harm the kind of gambling the state has already legalized.

“Mobile sports betting is highly competitive and will cannibalize higher margin, on-site casino revenue,” he wrote. “If mobile betting is legal, Ohio citizens will be more comfortable with the technology (and gambling in general), and they will turn to global, cryptocurrency platforms with built-in anonymity. This will simultaneously deprive the state of any of this potential tax revenue while siphoning revenue from existing gambling sources.”

On the other hand, if Ohioans are already gambling on sports, the state might as well legalize it and collect some of the money, wrote Wright State University economist Thomas Traynor.

“Sports gambling is already prevalent in Ohio, the state will now earn revenue, anti-gambling law enforcement spending will decline, and Ohio wage and salary earnings will rise,” he said. “However, gambling addiction problems will increase and many gambling losses will be suffered by low income households.”