Ohio Has 2nd-Highest Number of Kids With Elevated Levels of Lead in Their Blood, Study Finds 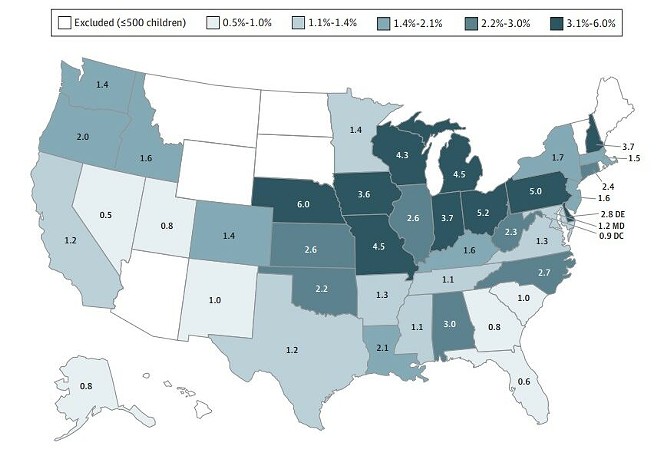 
Ohio children have elevated levels of lead in their blood at more than two times the national rate, according to a study released Monday.

The research, from JAMA Pediatrics, a peer-reviewed medical journal published by the American Medical Association, found about 5.2% of Ohio children have elevated levels of lead in their system.

Nationally, the rate is about 1.9%. Ohio ranked second nationally in terms of states with the highest rates of children with elevated blood levels.

Lead is a neurotoxin linked to developmental, mental, and physical impairment, and young children are especially vulnerable. There’s no safe level of exposure for children, though their blood is considered elevated when it contains 5 micrograms per deciliter.

Ohio is one of six states with kids’ proportions of elevated blood levels more than twice the national average, along with Nebraska (6%), Pennsylvania (5%), Missouri (4.5%), Michigan (4.5%) and Wisconsin (4.3%).

Lab tests detected some amount of lead in more than 1 in 2 Ohio children, about even with the national rate. The study is based on roughly 1.1 million tests conducted by Quest Diagnostics between October 2018 and February 2020.

More than 3,500 Ohio children were diagnosed with elevated blood levels in 2019, according to data from the Ohio Department of Health. Preliminary 2020 data indicate the number fell to roughly 2,800 that year.

The burdens of lead exposure are known to be borne disproportionately in poorer areas and communities of color. Much of the exposure traces back to homes built before 1978, which often used lead-based paint.

“Children living at or below the poverty line in older housing or in communities with high concentrations of poverty are at the greatest risk of the toxic effects of lead,” the study states.

Earlier this year, the Ohio Capital Journal reported as many as 650,000 lead pipes statewide deliver water to Ohioans, according to research based on self-reported data from a water industry trade association. This makes Ohio the second worst state in the nation as measured by the estimated number of lead pipes running drinking water.

This story was originally published by the Ohio Capital Journal and is republished here with permission.