Ohio House of Representatives, Which is Definitely Not Racist, Does Racist Thing as it Passes Racist Bill 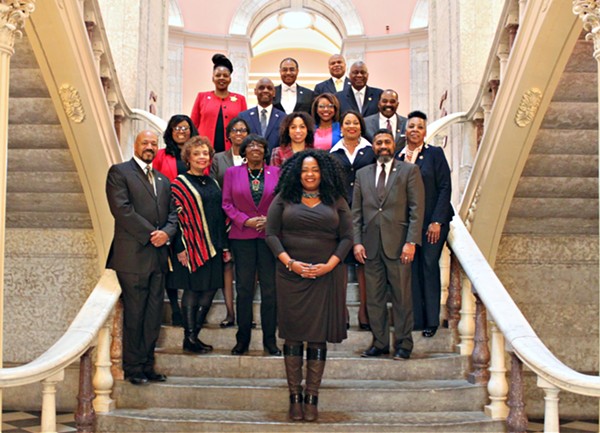 OhioHouse.Gov
Ohio's Legislative Black Caucus, with Stephanie Howse in front.
Wednesday, the Ohio House of Representatives voted along party lines to pass a "Stand Your Ground" bill which Democratic lawmakers who oppose it refer to as the "Kill at Will" bill. They say it will endanger Ohio's communities by allowing individuals to "shoot first and ask questions later."

The bill would reduce some firearm offenses to minor misdemeanors, make it much harder to prosecute gun violence cases, and preempt local authority to enact gun restrictions.

While the evidence is mixed on whether or not Stand Your Ground laws increases violent crime in other states, it certainly doesn't deter it. The nonprofit Everytown for Gun Safety, which opposes the bill, says that Ohio's HB228 would "upend centuries of traditional self-defense doctrine and threaten public safety by encouraging armed vigilantism and giving civilians in public places more leeway to shoot than the U.S. military gives soldiers in war zones."

One of its key effects, according to a 2013 study from the Urban Institute, is to justify the killing of black people by white people. In Stand Your Ground states, the study found, when white shooters kill black victims, the shootings are deemed justifiable 11 times more frequently than when the shooter is black and the victim is white.

That's one reason why Rep. Stephanie Howse, (D-Cleveland), spoke about the racial implications of the law before the vote yesterday. But when she mentioned that the bill's sponsors represented districts that were 90 percent white, House speaker Ryan Smith cut off her mic. He later said that he did so because she'd referred to other legislators by name, a no-no, apparently.

Smith was challenged about that decision after the vote, per Cleveland.com:

Smith told reporters after Wednesday’s session that it was “infuriating” that Howse suggested that he and the co-sponsors of the bill are racist.

The speaker said he cut off Howse because of a House rule that prohibits floor speakers from mentioning other lawmakers by name.

“It was disrespectful to the chair,” Smith said. “You cannot do that. That’s not how we do things.”

When it was pointed out that other lawmakers during Wednesday’s session mentioned colleagues by name and weren’t gaveled down, Smith replied, “When you’re speaker, you’re always second-guessed and [there are] armchair quarterbacks everywhere. It’s a subjective situation. I try to manage it as best I can.”


Howse, in an official statement, said that Smith and Republicans were creating greater division in the state of Ohio.

“This type of legislation is dangerous and leads to justified murder," she said. "The leaders of the Republican Party have shown their disregard for Ohioans and especially their disregard of black lives. It is a sad day in Ohio and I pray that one day my colleagues on the other side of the aisle will truly value the voices and lives of Ohioans—especially the 18 percent minority population of Ohio—and not intentionally divide Ohioans based on unfounded fear.”

Gov. John Kasich himself has said that he would veto any Stand Your Ground bill and has voiced his support for "Red Flag" legislation, which would allow police or family members to present evidence to a judge, who could then issue a specialized gun violence restraining order. The bill had the unanimous support of Cleveland City Council. When state Democrats tried to put forward a Red Flag bill, though, it was crushed in a party-line vote.

The current Stand Your Ground bill is supported by the usual suspects, the Ohio Buckeye Firearms Association and Ohioans for Concealed Carry, and opposed by more or less everyone else, including law enforcement (represented by the State Highway Patrol and the Ohio Association of Chiefs of Police). The Ohio Prosecuting Attorneys and high schoolers everywhere, who marched this year "for [their] lives" are opposed to the bill as well.

It is needless to mention that the Ohio chapter of Moms Demand Action is vocally opposed to the bill. The group issued a statement saying they'd be urging Ohio's Senators to reject it.

“Ohio’s public safety laws are in place for good reason,” said Sarah Mouncey, a volunteer leader with the state chapter. “At a time when the consensus is growing that we need to do more to prevent gun violence, this would move Ohio in the exact opposite direction.”

The bill comes on the heels of the gun massacre in Thousand Oaks, Calif., which, at the time, (Nov. 7), was the 307th mass shooting of 2018. There have been four mass shootings since then.