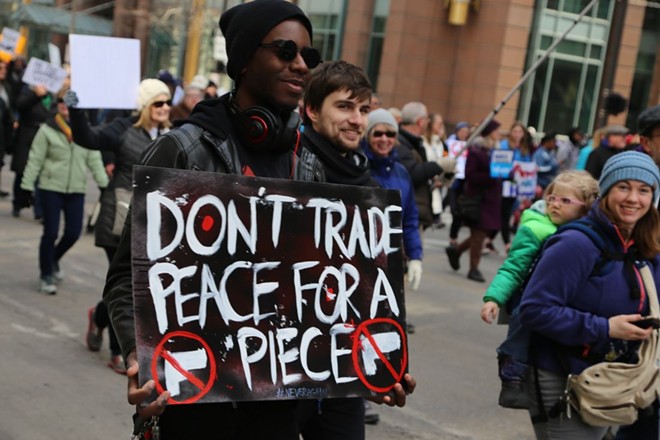 Emanuel Wallace
Ohio Republicans are currently trying to pass House Bill 228, commonly known as the "Stand Your Ground" bill. The statewide legislation would make it easier to use lethal force in self-defense, and would prevent local governments from passing their own gun control laws. Meaning, even if Cleveland decided that the "Stand Your Ground" bill is incredibly problematic, the city would not have the ability to follow Cincinnati and Columbus in passing their own laws for their respective community.

HB 228 was introduced by Republican Reps. Terry Johnson and Sarah LaTourette. All of the co-sponsors of the bill are Republican as well.

Gov. John Kasich threatened to veto the legislation, as he is in favor of House Bill 585, a bill that includes banning bump stocks and armor-piercing ammunition as well as creating a "red flag" law, which would keep guns from people deemed as threats by a court of law. HB 585 would also require all gun purchases to be entered into a statewide law enforcement database, a policy Kasich has long since encouraged local agencies to enforce.

HB 228 was stalled back in March, as the last hearing on the matter occurred one day before the tragedy at Marjory Stoneman Douglas High School in Parkland, Florida. Despite stalling, Senate President Larry Obhof said he thinks it could pass with a veto-proof majority.

This past April, Ohio legislators heard from Tess Stuber, a high school student speaking on behalf of March for Our Lives Ohio urging lawmakers to reject HB 228. In her testimony she stated that, “We are the future of this nation with the intent to protect ourselves in our communities."

Ohio's American Civil Liberties Union (ACLU) is also keeping a watchful eye on the progress of HB 228, noting on its site that the bill "modifies the Concealed Handgun Licensing Law by eliminating a licensee’s duty to keep the their hand in plain sight if impracticable, reducing the penalties for illegally carrying a concealed firearm or improperly handling firearms in a motor vehicle, and eliminating the requirement of posting warning signs regarding the possession of weapons on specified premises."

Ohio's House and Senate are quickly working to push bills through their chambers over the next two weeks before legislators take a summer break. Any bills that are not pushed through before the break will likely not pass until after the November election, when many of the congress members may be elected out of office.

Stuber's testimony explains exactly why Republicans are so desperate to pass this bill before break.