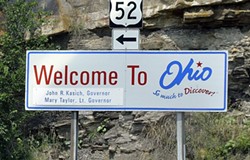 Wikimedia Commons
We respectfully disagree with Thrillist's recent blog post that ranks Ohio one of the worst states in the nation.

Ohio barely beat out Delaware and Florida to land in 48th place, and according to the blog, bringing LeBron home only confirmed that we're "the Florida of the North." Which can't be true, because Ohio at least manages to squeeze out some integrity every now and then.

That's all the list bothered to say about us, so they probably didn't do much research. Their ranking took into account each state's contributions to America, including historical inventions and influential people. Ohio has those in spades.

Seven presidents have been born in this state, which is more than any other state in the nation. Rock and roll started here, hence the Hall of Fame that you've probably heard of. We're the birthplace of aviation, and also of more astronauts than any other state — including John Glenn and Neil Armstrong. The Wendy's Baconator also originated here.

We might be closer to Florida than we think, because there's enough to see and do in this state to qualify it as a legitimate tourist destination. We've got both Cedar Point and King's Island. The Columbus Zoo is one of the best zoos in the entire country (and, more locally, the Cleveland Metroparks Zoo isn't too shabby, either).

And did you know that, according to Ohio law, you can't get arrested on any Sunday or the 4th of July? Don't test this, by the way.

Of course, we're trying to offer a civilized rebuttal here, but if you're an OSU fan, break out your officially licensed scarlet-and-grey torches and pitchforks. Michigan landed in the No. 1 spot.

Michigan earned its high ranking partly because of its wealth of craft beer, but here in Ohio you can hop from Great Lakes to Fat Heads to countless other breweries without even leaving Cleveland. There's certainly enough alcohol available to drown out any other grievances with our state.

At least the writers at Thrillist know to expect some heated arguments, so hop on over to the comment section at the end of their article and have at it. Come on, we should've at least beaten the Dakotas.