Send a News Tip
Here's a statement so true Moses should have chiseled it onto the tablet he schlepped off the mountain: legal documents are boring. They're dry. They're repetitive. They'd put a 90-pound ten-year-old to sleep even after his morning Adderall dose.

No doubt, Franklin County Common Please Judge David E. Cain knows this well. That, however, didn't stop the Columbus-area jurist from having some fun with a recent lawsuit decision. If you spend any time around the courthouse, you know that inmate lawsuits — hand-scrawled pleas that can be serious issues but more often than not are instances of caviling and complaining — jam up the court system. One such case was filed in October by Darek Lathan, an inmate at the Correctional Reception Center in Orient, recently seemed to have tested Cain's patience.

In the complaint, Lathan charges that he wasn't allowed to use a bathroom while he was waiting in a line. So, Lathan says, he shit himself in the line. The other inmates noticed, and laughed at him. Lathan sued the facility.

Judge Cain dismissed the case today — but not before having some fun with it. The judge composed his answer in verse. 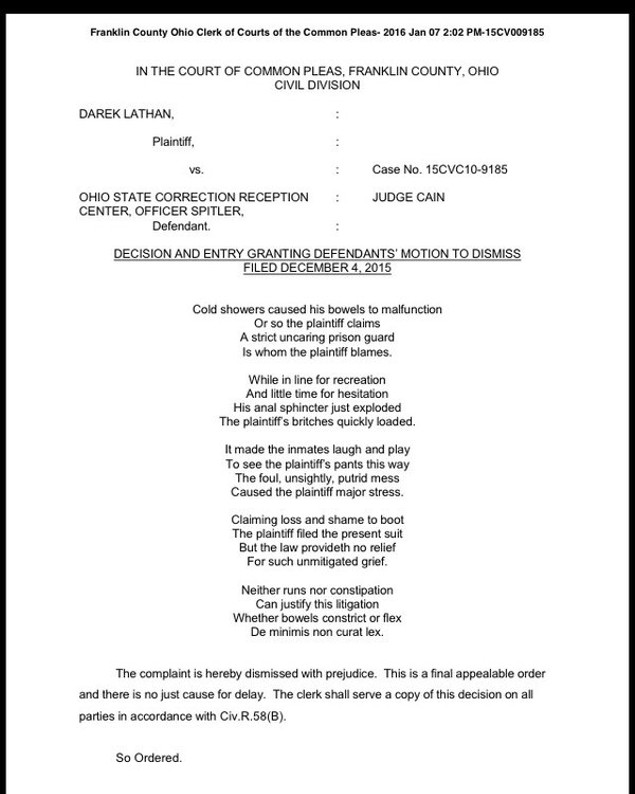