Ohio Legislators Will Head Back to Redistricting Drawing Board in 2023, But Without Maureen O'Connor to Worry About (Sort Of)

Advocates are putting together a possible ballot measure, and O'Connor has said she'll be part of the effort 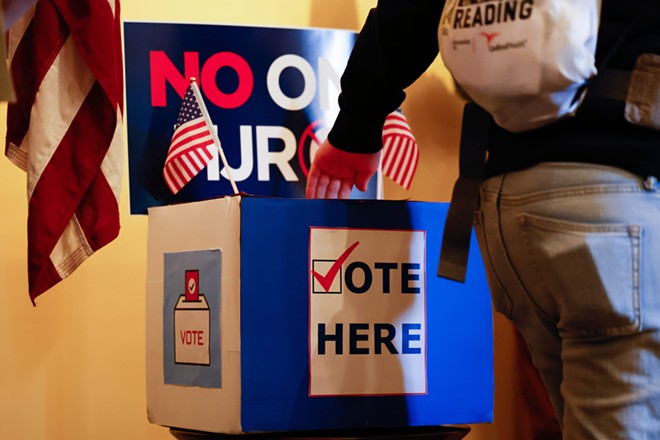 (Photo by Graham Stokes for Ohio Capital Journal)
COLUMBUS, OH — DECEMBER 13: Representatives from multiple organizations opposed to HJR 6 cast ballots in a mock election at a press conference, December 13, 2022, at the Ohio Statehouse.

The new year could include many different developments in the redistricting arena, but one thing is for sure: new maps have to be on the agenda.

But this time around, majority leaders may not have as much trouble getting maps through the current approving authority: The Ohio Supreme Court.

With the departure of Chief Justice Maureen O’Connor due to age limits, Justice Sharon Kennedy was elected to take the top spot, and Kennedy made clear how she felt about redistricting in the past, accusing the court majority of judicial overreach in rejecting maps as unconstitutional.

The maps have gone through the ringer: Statehouse district maps have been rejected by the state’s highest court five times, and congressional maps have been turned down twice.

After the last round of rejection, GOP members of the Ohio Redistricting Commission turned to a federal U.S. District Court for an answer, which came in the form of the temporary approval of a map passed in February, but still deemed unconstitutional by the state supreme court.

The three-judge panel in federal court said they did not intend for the map to last ten years, or even the four years laid out in the constitutional amendment that reformed the process. The ORC could pass a map without bipartisan support, but the map would only last four years.

The GOP took another step around the Ohio Supreme Court, by appealing to the U.S. Supreme Court on congressional redistricting, and the power of the state legislature over the state supreme court.

The nation’s highest court has not yet decided whether it will take up the case, and is still deciding a different redistricting-related case, Moore v. Harper, which also addresses the role of the state legislature in elections.

U.S Sen. Sherrod Brown pointed to ousted Ohio House Speaker Larry Householder’s corruption scandal as part of the problem the state is having in attempting to resolve the redistricting issue.

“This state government is the most corrupt in the country,” Brown said on a press call. “I think there’s no question about that.”

Householder wasn’t a part of redistricting, but his predecessor as Speaker, Bob Cupp was, along with Senate President Matt Huffman.

“Of course, (GOP members of the legislature) know they’re losing elections all over the country based on the fact that they are out of step with the majority of voters, so they believe the only way to win is change the rules,” Brown said.

Legislative leaders have not made any indication for sure as to when the process will start again, though the need to pass a new state budget may slow the process down.

Voting advocates have said they are pulling together a new ballot measure, that could change redistricting yet again. Outgoing Chief Justice Maureen O’Connor has said she plans to help anti-gerrymandering efforts.