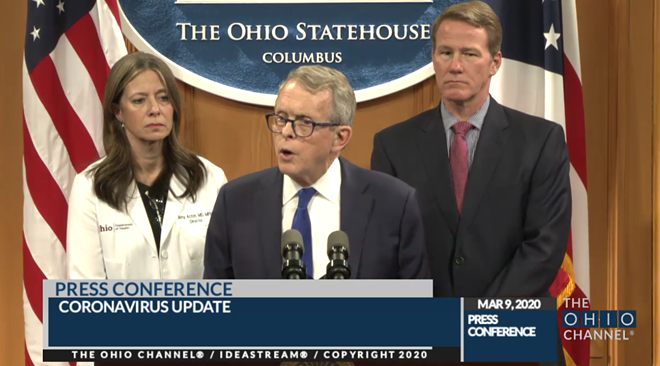 Screenshot/Ohio Channel
In a press conference this afternoon to update Ohioans on the state's strategy in containing the coronavirus, Gov. Mike DeWine said the state has recommended, though not demanded, that all Ohio universities move to remote classes, that indoor sporting events be held without fans, and that large outdoor gatherings like parades not take place.

Three Ohioans have tested positive for coronavirus so far, all in Cuyahoga County. A little more than a dozen are currently being tested.

Emphasizing the personal responsibility of all Ohioans to practice social distancing, DeWine said: "Every act each one of us takes now has very significant consequences. Each decision not only impacts us, not just our families, but people we don't even know. We're at a critical time."

Ohio two-year and four-year colleges and universities were among the various groups and organizations he's recently talked to about precautions and changes in procedures. The state recommends that any student returning from spring break travel to a cruise or another country be screened upon returning, and that all colleges and universities move to remote classes. Ohio State has already announced its decision to cancel in-person classes.

DeWine also spoke to representatives from OHio high school athletics and said the state has recommended that indoor events go on without fans, except for parents.

He also today talked to representatives from all Ohio pro sports teams. "While outdoor sporting events could continue, the great concern is indoor events with spectators. The recommendation is that for indoor events there be no spectators and those essential for the competition."

The state's recommendation would be that even if the events are held, Ohioans not attend. The Cavs and Blue Jackets, DeWine said, say their arenas have advanced ventilation systems, but he said he hasn't been able to run that by the state's health team to confirm whether it would make any difference.

The NBA and NHL have made no announcements on the issue. Major League Baseball has said the impending season will go on as planned, as of now. The MAC tournament at the Rocket Mortgage Field House is, again, as of now, scheduled to go on as usual. The same goes for the NCAA tournament, with games scheduled for Cleveland later this month.

DeWine also said the state has recommended that parades be canceled. Cleveland has made no announcement about next week's St. Patrick's Day parade. Boston has canceled its festivities, while New York has said theirs will go on.

"We're in a period when the tough decisions we have to make... we don't want to look back and say, we could have saved a bunch of lives but we didn't learn from what was happening before. We have to listen to experts, and the experts say don't be in a situation with large events."