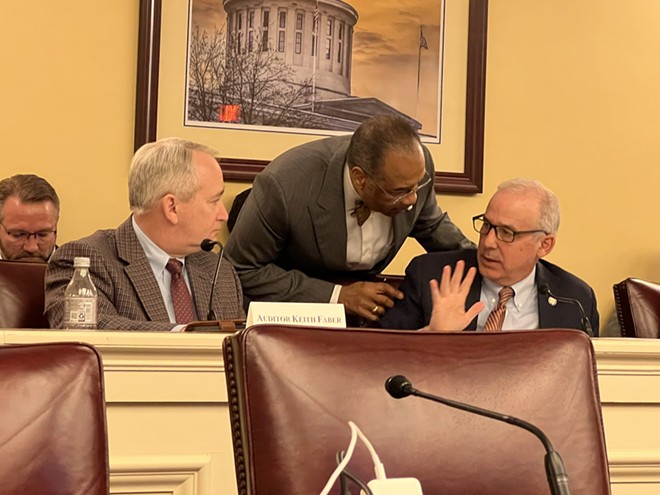 In doing so, they abandoned independent mapmakers they had hired.

Commissioners said they did this to fulfill their obligation to send a map to the Secretary of State’s Office and the supreme court by the end of the night.

In the court’s previous rejection, it introduced the idea of using independent mapmakers and objected to the partisan process that had been playing out in previous attempts of Republicans drawing and passing maps to their benefit. The court also asked for “entirely new” maps.
The maps were first passed in February on a 4-3 vote, with Auditor Keith Faber representing the only GOP “no” vote. They were rejected by the court in mid-March.

That 4-3 vote was maintained along the same lines this time, and Faber wasn’t wholly confident the court would see the map the same way the GOP did.

“I think that there’s a decent chance that this map won’t meet the court’s test,” Faber told reporters Monday night.

Senate President Matt Huffman brought up the revised maps Monday evening, as Dr. Douglas Johnson presented an update on the independent mapmakers progress. He did so, expressing doubts that the mapmakers could get the process done in time.

“The reason is we had essentially 12 days to hire experts, get them in, for them to understand the rules, work with the staff and all of that,” Huffman said.

The maps show a 54-45 GOP advantage in the House and an 18-15 lead in the Senate, but 17 of the Democratic House districts and seven Senate districts are considered political “toss-ups,” meaning they are within two percentage points in partisan breakdown.

In the original maps, 19 House districts fell under that range, but the Senate breakdown was the same, with seven Senate districts as “toss-ups.”

When asked about the slight changes to the maps, House Speaker and commission co-chair Bob Cupp said “it comes closer” to what the court was asking for.

When asked about it by reporters on Monday, Huffman confirmed that the supreme court had said they wanted new maps, rather than old maps with a new look, but said the “parachute” proposal was necessary to get the court maps before the deadline.

The last legislative maps were passed one week after the deadline, as commissioners said they were at an impasse, and couldn’t come to any agreement.

In the process of passing the revised map on Monday, the GOP members also bypassed independent mapmakers’ proposals for House and Senate maps.

The final maps that Johnson sent to the commissioners after they’d already passed the revised third maps had a 54-45 House split, and an 18-15 Senate split.

Cupp said in the short time he’d had to view the maps he saw “egregious compactness issues,” and said he was “not comfortable with this map.”

GOP commissioners also said that because they never had a Senate map to review before the end of the night, and didn’t have enough information they desired on House maps, they wouldn’t have time to offer amendments or submit the maps on time.

The same could be said of the adopted maps, Dem commissioners argued, having heard from most GOP members that their first look at the new GOP-drawn maps was just before the Monday night hearing took place.

“You’d rather us vote on that than have a couple more hours to get this right and not have to be here again,” House Minority Leader Allison Russo said on Monday.

Over the weekend, McDonald and Johnson drew draft maps and said only a few areas tripped them up.

But what truly became an apparent brick wall for commissioners on either side of the aisle was the inclusion of incumbent residency information in mapmaker consideration.

Senate President Matt Huffman brought up the issue on Saturday, saying incumbents, in particular Senate incumbents, had a constitutional right to serve out their terms “and can not be redistricted out,” but acknowledged it wasn’t necessarily a law for redistricting.

“Now, not required, no requirements of any kind, because the court’s made it clear that’s not true,” Huffman said.

The state supreme court singled out Huffman specifically in their most recent rejection of legislative maps, and targeted his knowledge of the constitutional provision regarding redistricting and incumbents.

The majority opinion said Huffman “misunderstands” the constitutional provision, and Huffman’s “concern for protecting incumbents is not grounded in Article XI.”

Ohio law says incumbents are allowed to serve out their terms even if they are drawn out of their districts, but they continue to serve the largest part of their former district.

“(The Ohio) Constitution, Supreme Court comes first, but it should be a goal of yours to try to draw a map that has those 16 Senators living in the district they represent,” Huffman said in pushing for incumbent addresses to be included anonymously in the map-making process.

Democratic commission members didn’t agree with the suggestion, and Russo said including that information might “taint” the mapmakers abilities to draw the maps purely within constitutional and legal boundaries.

The map drawers were instructed to avoid pairing incumbents “where possible without violating constitutional principles.”

The independent mapmakers had their two draft maps consolidated on Monday afternoon, and found the maps to be proportional both in the House and the Senate.

They came to commissioners to ask for guidance on Montgomery County and Cuyahoga County in particular, asking whether the commissioners had preferences as to what neighboring counties the two should be attached to for proportionality and compactness.

Montgomery County became a significant sticking point for commissioners and mapmakers. Commissioners argued about the pairing with Greene County or with Preble County.

The Montgomery County question was a problem that McDonald said was impeding their progress, forcing them to come to the commission for answers.

“We have a clock and I just really want to implore upon you we really need guidance from you. We saw it yesterday, I’m begging you today, to give us guidance,” McDonald told the commission on Sunday.

Commission co-chair state Sen. Vernon Sykes said the majority party “hijacked the process” and Russo called the GOP maps, the quick motion to pass the maps and the process a “complete farce.”

“There seems to be no end to the arrogance of the supermajority,” Sykes said.

Wednesday, the U.S. District Court will be holding a hearing related to the maps. A three-judge panel was awaiting the ORC to make decisions, and to get answers from the Secretary of State’s office on “drop-dead” dates for election deadlines.