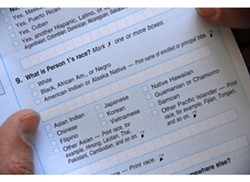 FlickrCC
CLEVELAND - A request by the Justice Department to add a question about citizenship to the 2020 Census is drawing concerns from some Ohio researchers.

Emily Campbell is the associate director of the Center for Community Solutions in Cleveland and a Williamson Family Fellow for Applied Research. She explains that the census, widely used to better understand the composition of communities, is the "gold standard" of data collection. And after a recent focus group, she notes that the Census Bureau reported unprecedented levels of concern about data confidentiality.

"Specifically asking about legal status, there is the concern people will either answer untruthfully or may not answer certain questions about members of their family," she says. "And so, that could threaten the entire accuracy of the counts that are coming out."

Those in favor of adding the question, including the Trump administration, contend the number of undocumented immigrants in the country is unknown, which makes it difficult to develop immigration policy. But Campbell notes census-takers already ask questions about a person's place of birth, country of origin, and when they came to the U.S. Questions proposed for the 2020 Census must be submitted to Congress for consideration by April 1.

Census data is used to analyze poverty, income, housing, family structure and other demographics to identify issues within communities. And Campbell says anything that could discourage honest answers would compromise the results - so, there's a lot at stake.

"It not only determines how communities are represented in Washington, how many members each state has in the House of Representatives and how those lines are drawn, but it also helps determine where more than $400 billion in federal funding goes each year," she explains.

Senate Democrats recently asked the Justice Department what prompted the request for the citizenship question. President Trump has not publicly commented, but his re-election campaign has emailed fundraisers asking them to support the president in adding the question. Campbell sees that as politicizing what should be nonpartisan.

"The buzz about asking about legal immigrant status is really a perhaps misguided attempt by some policymakers to take an ideological stand on something that's very 'not ideological,' and that's census counts," she says.

Questions approved for the 2020 Census will begin to be used in 2019 for the American Community Survey.