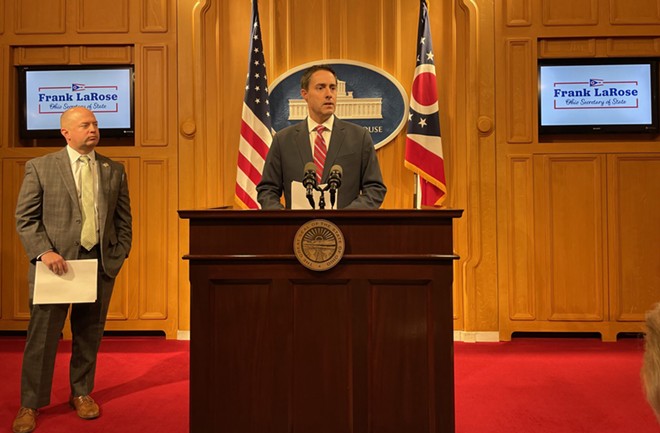 Ohio Secretary of State Frank LaRose denied that he wanted to block abortion protections or anti-gerrymandering measures when he announced that he wanted to hustle through a measure that would make it harder for voters to amend the Ohio Constitution.

But he’s failed to point to a single amendment in the Constitution as an example of what he’s trying to protect against by changing rules that have been in place for more than a century.

LaRose is proposing that — after advocates clear the already high hurdles to get proposed constitutional amendments on the ballot — they also be required to get at least 60% of the vote instead of the 50% plus one vote that’s currently needed.

Meanwhile, amendments initiated by Ohio’s gerrymandered legislature would continue to need only 50% of the popular vote to make their way into the state Constitution. Ironically, the amendment LaRose wants that would make it harder to pass voter-initiated amendments falls into that latter, easier-to-pass category.

LaRose’s stated reason why citizens should lose some of their ability to change the Ohio Constitution: It’s badly needed to protect against wealthy interest groups that want to insert self-serving measures into what LaRose called “the state’s founding document.”

“If someone is a special interest and they want to create a monopoly for themselves let’s say, or to try to do something that narrowly benefits their own interest, maybe it will make them think twice before they try to amend the Constitution,” LaRose said during a press conference on Nov. 17.

So how many times have such powerful special interests actually succeeded in initiating a harmful constitutional amendment?

LaRose didn’t cite any during his press conference. Instead, he said that of the 16 citizen-initiated amendments proposed in the past 22 years, just five have passed. And in response to a question, the secretary of state conceded that of the ones that passed, just two failed to get less than 60% of the vote.

LaRose’s office didn’t respond when asked for an example of a problematic amendment in the Ohio Constitution that his proposal would have prevented  — or to other questions for this story. But while he and his staff didn’t cite any such examples, there are some citizen-initiated amendments coming that LaRose and the state’s other Republican leaders may well oppose.

One is a measure that would amend the Ohio Constitution to protect abortion rights.

When the U.S. Supreme Court in June overturned Roe v Wade, a 2019 law signed by Gov. Mike DeWine took effect. It outlawed the vast majority of abortions months earlier than they had been and almost immediately, horror stories started to pile up.

This month’s elections showed that in states where abortion was on the ballot, it proved to be a powerful motivator for supporters of abortion rights. And, with the Republican dominated legislature expected to pass even stricter restrictions, abortion-rights groups are planning to seek a voter-initiated amendment to protect those rights.

At the same time, LaRose’s fellow Republicans in 2021 and 2022 ignored voter-initiated amendments against gerrymandering that passed with more than 70% of the popular vote. The Republican-dominated Redistricting Commission drew state legislative maps that were rejected five times by the Ohio Supreme Court as unconstitutionally gerrymandered. LaRose sits on the commission and voted for each of the maps that have been declared unconstitutional by a bipartisan court majority.

GOP members of the commission complained that the changes the court was demanding were unconstitutional. That ignores the fact that it’s the job of the Supreme Court to decide what is or is not constitutional — not members of the executive and the legislative branches who were litigating a dispute before it.

In April, LaRose told a group of Union County Republicans that he’d “be fine with” impeaching Republican Chief Justice Maureen O’Connor for voting with the court’s three Democrats to strike down the Republican-drawn maps. LaRose claimed O’Connor had violated her oath of office in ruling against his party.

The Republicans succeeded in running out the clock and starting next year, the party’s representatives in the state legislature will continue to be wildly overrepresented compared to the partisan mix of the state as a whole. And they’ll be representing districts that are officially unconstitutional.

The chief justice, who is retiring, has said that citizens need to come up with new citizen-initiated amendments with fewer loopholes if Ohioans want to end extreme gerrymandering.

In his press conference last week, LaRose claimed that he’s not seeking to block amendments supporting abortion rights or ending gerrymandering. Such short-term goals weren’t good reasons for undertaking something as weighty as amending the Ohio Constitution, he said.

“If you’re going to amend the Constitution, you need to be thinking about the long term,” he said. “So anybody who’s thinking about shorter or transient goals in the next year or two or three years, that’s not what this kind of a change should ever be about.”

LaRose added, “If we’re talking about amending the Constitution probably for the rest of our lifetimes, that’s something that should be taken very seriously.”

But among the questions his office wouldn’t answer this week: Why — if this should be such a deliberative process — did he wait until late November to announce that he would try to ram the measure through in a weeks-long, lame-duck session with an eye toward getting it on the ballot in May? Only about five months would elapse between the time the public first learned of the proposal and when it could alter the state Constitution, as LaRose said, “probably for the rest of our lifetimes.”

In his press conference, LaRose denied that he was trying to hurry the measure through.

“I don’t think it’s a rush necessarily,” he said. “It’s an idea whose time has come.”

Ohio Democrats have denounced LaRose’s push as a “power grab.”

But at the same time he was proposing to make it harder for voters to change the Ohio Constitution, LaRose seemed to say he was doing it in support of democracy.

“That’s the beauty of this, is that all the power rests with the people of Ohio,” he said.