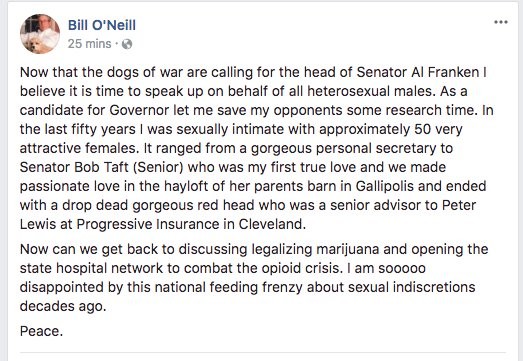 That's Bill O'Neill, the only Democrat on the Ohio Supreme Court and a recently announced candidate for Governor. The dude's very big on weed.

In the wake of reports about sexual misconduct by Senator Al Franken and other meticulously reported accounts of abuse by prominent figures in the worlds of politics and entertainment — what O'Neill calls a "national feeding frenzy about sexual indiscretions decades ago" — O'Neill saw fit to speak on behalf of "heterosexual males" everywhere.

But O'Neill makes a critical mistake in his stupid (and presumably satirical) post. (Update: It is not satirical at all. In an interview with Cleveland.com, he confirmed the post was serious, defended Roy Moore, and said he wasn't sure the tally of 50 women was accurate because "he doesn't keep count.")


In which an Ohio supreme court justice and candidate for governor conflates sexual assault with consensual sex... https://t.co/SeuK18n9V5

Indeed, a steamy hayloft tryst with a "gorgeous personal secretary," though pretty obviously fabricated (at least to some degree, I assume), is not at all what the "national feeding frenzy" is about. As reporter Jackie Borchadt notes in the tweet above, it's about assault. It's about a culture where sexual abuse has been accepted and sanctioned among society's most powerful men for decades.

1/ The reason there's a concern about disproportionate responses in the last month of sexual misconduct revelations is that we've utterly abandoned the rule of law in America.


We can for sure still talk about legalizing marijuana and battling the opioid crisis. But the conversation around sexual misconduct, and the culture that permits it, is necessary. Another Democratic Gubernatorial hopeful, Betty Sutton, announced yesterday that if elected, she would create a Sexual Harassment and Assault Office within the executive branch.