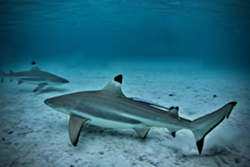 Photo via toutiess/Instagram
A pair of blacktip sharks.
You're more likely to die from a bee or cow attack, or even stumbling into a hole on the beach, than an encounter with a shark. But shark attacks still rank among beachgoers' worst nightmares, and Ohio teen Reagan Readnour learned this the hard way last month, when she suffered a nasty shark bite at Hilton Head's Burkes Beach.

Readnour, 14, told The Island Packet that on June 18, the first day of her vacation to South Carolina, she was floating on a boogie board when she felt something pull her leg.

She initially assumed it was her younger brother "messing with" her. Soon, however, she knew it was something more.

“My brother was laughing at me . . . and then he saw blood and realized it was serious,” she told the Packet. “His face turned white, then I started screaming, and they all started helping me and calming me down. I think I kind of blacked out at that point.”

While there were only eight counties in the U.S. that saw more than 15 shark attacks from 2000 to 2015, two of them belong to South Carolina (neither of them include Hilton Head, one of Clevelanders' favorite vacation spots).

Of the 630 attacks that occurred in the U.S. during that time frame, only 15 were fatal.

“I feel lucky that I only had a few lacerations, and I mean, not a lot of people get to say they got bit by a shark,” said Readnour.

George Burgess, a University of Florida scientist who specializes in shark bites, determined the perpetrator was probably a blacktip shark. An Indiana teen was also reportedly bitten at Hilton Head the same week, but her injuries weren't as severe.

Readnour said while she'll definitely return to Hilton Head, she probably won't be wading into the ocean ever again. But in the meantime, the incident has earned the teen a new moniker among her friends: "Shark Bait."