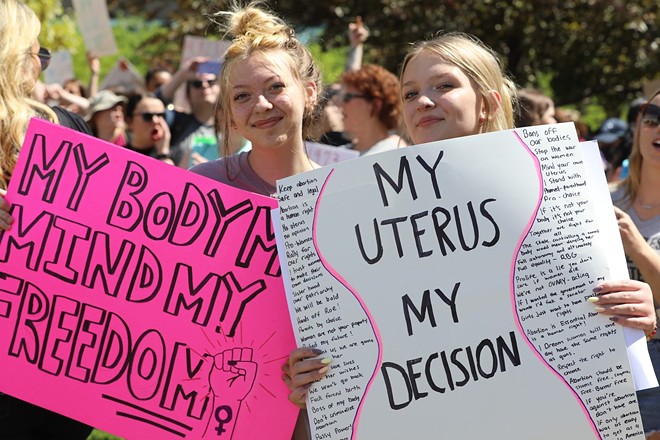 
The majority of Ohioans want abortion care to remain in place, but the likelihood of a near all-out ban on procedures is practically certain as Ohio lawmakers prepare for the likelihood that the U.S. Supreme Court overturns Roe v. Wade this summer. In the Buckeye State, conservative political games will enable that to happen.

While the divide between Ohioans' opinions on the procedure might seem razor thin, the push by Republicans to ban the procedure in the state has been almost effortless. A statewide ban on abortion care after six weeks gestation (aka the "heartbeat bill") is already on the books and will go into effect if the U.S. Supreme Court overturns Roe v. Wade. Two “trigger” bills outlawing abortion care (except in vaguely outlined emergency cases) are poised to pass.

“I think a realistic person would say there is almost no constituency in Ohio for an abortion ban, and yet that is by far the most likely policy outcome we’re looking at,” David Niven, a University of Cincinnati political science professor who researches gerrymandering and has testified as an expert witness in gerrymandering cases, says.

"There’s only one reason why Ohio has a legislature to the right of Mississippi, and that’s because the maps were drawn to make it that way,” he says. "The maps we’ve been living under for the last 10 years are roughly the second-most gerrymandered in the country."

Ohioans will pick new state lawmakers on Aug. 2 using district maps that the Ohio Supreme Court has repeatedly rejected as unconstitutional for unfairly favoring Republicans. Niven says the U.S. Supreme Court is shifting the decision on abortion care to the states without considering how redistricting is shifting policy outcomes away from what voters actually want.

“I don’t think catch-22 is a strong enough phrase,” Niven says. “That is kind of an Alice in Wonderland logical trap.”

The maps are expected to stay in place for the November general election, when voters will decide who sits in the governor’s seat. Democrat Nan Whaley, who is facing off against incumbant Mike DeWine, says there is a lot she would be able do as governor to resist a ban on abortion care.

“The governor’s office in Ohio is about the fourth most powerful in the country, not only because of line items, but because of appointments and the work they can do on access around public health. There’s no singular position more powerful, regardless of what the legislature does, than the governor’s seat for this issue,” Whaley says.

In order to stop the passage of a ban, Whaley would need real veto power, which is something a Republican-packed House and Senate would prevent. The Ohio Senate is made up of 25 Republicans and eight Democrats, with 17 seats on the upcoming ballot. Currently, there are 64 Republicans in the Ohio House and 35 Democrats, and while all their seats are on the ballot, the odds of Democrats taking enough new seats to prevent a three-fifths vote overruling a Whaley veto is slim, Niven says.

“Democrats are not going to come close to a majority. The best case scenario is they win enough votes to stop the legislature from overriding a theoretical Nan Whaley veto. But the odds don’t really favor that as an outcome,” Niven says.

There are other offices on the ballot beyond the legislature that could impact the way a ban on abortion care is felt in Ohio.

Rep. Jeff Crossman is challenging incumbent Dave Yost for Ohio's attorney general. He says Yost, who did not respond to a request for comment, promised to ask the court to remove an injunction that would set the heartbeat bill in place.

“The role of the attorney general is to preserve people’s civil rights,” Crossman says. “Having an attorney general that’s going to continue being a champion for women’s rights is important.”

Crossman says that in order to give Democrats a chance at districts in a way that would be constitutional under the Ohio Supreme Court – and, in turn, give them a shot at influencing abortion care access – the attorney general needs to hold the redistricting commission’s feet to the fire. Crossman filed a criminal dereliction of duty complaint against the commission on May 26, a lead he wants Yost to follow.

“The attorney general should be joining in in saying these folks are acting in contempt, because that's exactly what's happening,” Crossman says. "We’re being ruled, not governed.”