On the 50th Anniversary of the Hough Riots, Lessons and Parallels for Today's Cleveland 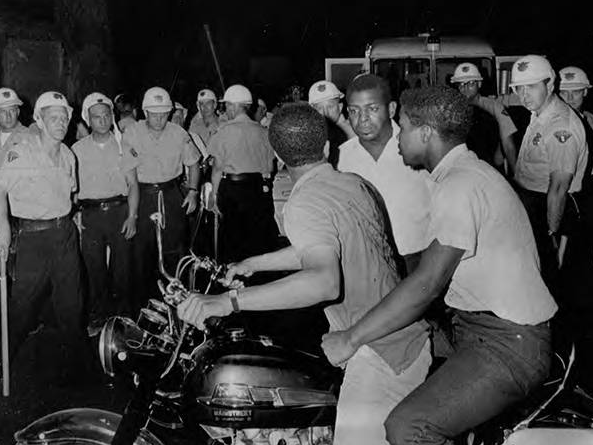 The Hough Riots cratered the city’s image like no other event in Cleveland’s history. On July 18, 1966, rocks began flying on the city’s predominantly east side, a neighborhood that had been a pressure-cooker of low-income stress factors like terrible housing, bad schools, and police brutality. For the next five days, the city burned as 2,200 National Guardsmen arrived to quell the violence. Four Hough residents died. The city saw millions in property damage — and the lasting legacy of racial strife that we’re picking up and examining again now that that the riot’s 50th anniversary has arrived.

What’s less remembered, however, is the attempt to patch the city back together following the violence – an effort that face-planted completely and set the stage for the Cleveland’s racial tension for decades to come.

After the fires were out, a Cuyahoga County grand jury was called on July 26 to investigate the source of the violence. Chaired by Louis B. Seltzer, the powerful editor of the Cleveland Press, the paper of choice among Cleveland’s working class.

When the jury came back on August 9th with their report, the results were almost laughable. Instead of scratching at the deep economic and political grievances that led to a mass group of people to express their frustrations through violence, the official Cuyahoga County explanation was that the commies did it. Seriously.

The report explained the riots were the work of “a relatively small group of trained and disciplined professionals at this business . . . aided and abetted, wittingly or otherwise, by misguided people of all ages and colors, many of whom are avowed believers in violence and extremism, and some of who also are either members of or officers in the Communist Party.”

City Hall gave this explanation their stamp of approval. Mayor Ralph Locher praised the group for having “the guys to fix the approximate cause which has been hinted at for a long time, that subversive and Communist elements in our community were behind the rioting.”

But the black community was not going to let such a tone-deaf response from the city’s power brokers stand. On August 22, black political leaders – including future mayor Carl Stokes – held a community forum on the east side to address both what happened during the riots and the conditions that caused the explosive violence. The transcripts – officially known as the Cleveland Citizens Committee on the Hough Disturbances – are a peek into the mindset of Cleveland’s black community, and also eye-poppingly relevant to what’s happening in the city today.

Hough residents spoke about their lives inside the neighborhood – a cycle of harassment by police, bad housing, and stores that jacked up the food prices on days when the government welfare checks came in.

“I know one family, which always comes to my mind, a husband, wife, four children sleeping in one bed with rats and mice regularly crossing the children’s faces at night,” one community activist told the committee. Another resident explained how the neighborhood felt about the white business owners. “People are not dumb to the fact that these people are living off us niggers.”

Residents also testified to police behavior during the riot that never made it into the mainstream news coverage of the Hough disturbance. One young black man told the committee about a run in with police he had with his wife. Not only were couple roughed up, but the young man was shot in the eye. Others reported having the police kick down their doors and haul off everyone inside. “I have seen police brutality. I would say that this happens all the time,” one woman reported. “This was outrageous. This was a little different.”

“You don’t need anything to incite people when they know they’re being mistreated,” a woman said. The same witness was asked about what she would like to see from the police department. “Someone that would know that they are servants and not Gestapos,” she replied. “Someone that would be able to talk with people and not reach for his gun every time he saw two or three colored kids standing on the corner.”