Op-Ed: Saturday's Protest Turned Chaotic Because of Brutality by Cleveland Police, Not an Amorphous Group of Radicals 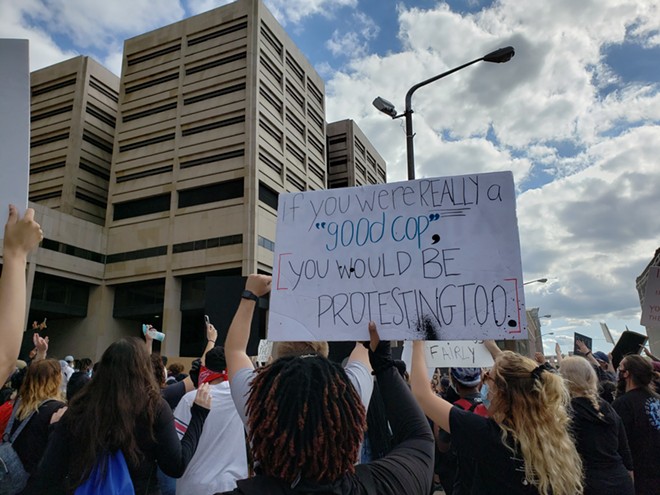 The events of Saturday, May 30th, were the result of multiple and cascading failures: The failure of leadership at the local level. The failure of our law enforcement agencies to act in the manner that their position and profession should demand. The failure of our society to meet the needs of our most oppressed, desperate, and vulnerable. And the failure of our media to accurately cover all of those things.

My frustration began Saturday night when I returned home from the protest downtown and began flipping around the local television stations in search of coverage. The reports I saw, specifically from the local media, frustrated and saddened me — a blend of anchors at desks, pre-produced segments, and live on-the-ground reports from downtown, all which focused to one degree or another on rioters, looting, and destruction. I took it in stride, defeated, only occasionally responding out loud towards the screen. It was a predictable response by a predictable segment of our media. My true outrage would be sparked the next morning when I went out to my front porch to grab the Sunday paper.

Now may be the appropriate time to interject two things that I want to make clear. First, I am hesitant to write about what happened to me personally because, in my mind, that’s not the real story. I decided to do so only because my first-hand account is necessary to tell the broader story I want to tell and issue the critiques that I want to issue. Second, many of my critiques focus on the response of the Plain Dealer/Cleveland.com and Editor Chris Quinn. I wanted to focus on that because of the higher standard to which I hold the Plain Dealer and the Plain Dealer would ostensibly purport to hold itself. They are by no means the only media outlet that deserves criticism, but their standards, access, and influence make them the most prominent for my purposes.

When I went out Sunday morning and grabbed the Plain Dealer I was hoping to find coverage of the injustice and brutality that I had experienced first hand the day before. Of why those things occurred in the first place. On who was responsible for downtown Cleveland being turned into a war zone. I was hoping to have something to point to that made me feel like there could be even the slightest bit of justice or accountability.

I was quickly disappointed.

I began to understand in the subsequent days when I discovered that Cleveland.com has a daily podcast hosted by Chris Quinn. The language used, the framing of topics, and decisions on what to discuss, made it clear why the initial coverage was so poor. The experience I had and the experience that was being conveyed were wildly different.

Quinn mentioned “very large boulder style rocks” being launched prior to the police response. He opined that what took place was “clearly an organized set of violent acts,” and referred to the act of spray painting as one of the catalysts for the police response. There were constant references to rioters and looters. There was no discussion of police brutality or culpability.

That was Monday on their podcast. Tuesday and Wednesday were no better. The entirety of the coverage in the days that immediately followed was depressing and enraging. It was a mix of lament over broken windows and business inventory, and public relations for city officials and law enforcement. There was finally an in-depth article Wednesday about the lack of a dispersal order, and then one Thursday about police pepper spraying and shooting projectiles at legal observers. Four and five days after the protest, respectively. And while I applaud those reporters and those articles, the narrative was crafted in those days that immediately followed, and that narrative was disgraceful.

I was on the steps of the Justice Center, about ten feet away from the line of police in riot gear, when they began their assault on the protesters. Not only was there no order to disperse that I heard, I didn’t see any member of law enforcement equipped with anything that would even allow them to make an announcement to the crowd. No bullhorns, no megaphones, no PA system. Nothing. Cleveland.com did, to their credit, finally get around to reporting on this four days after the demonstration, but they also mixed in unsubstantiated, dubious claims from the CPD that they did have an officer with a megaphone giving an order to disperse. Of course, it’s not clear if this officer was around the corner of the Justice Center, on the front steps, or behind the bulk of the protestors in a park across the street. In any event, Quinn himself noted on Thursday’s podcast that the police told him they had video evidence, but for some reason didn’t provide it.

Regardless if there was someone in uniform somewhere in the vicinity supposedly giving an order to disperse, I certainly didn’t hear it. And I was just about as close to the line of officers as one could be. What happened next is at the heart of what should be covered and why I was down there in the first place. The police responded to shouting, some water bottles and produce being thrown beyond them at the Justice Center windows, and sporadic graffiti, with a show of force that I can only describe as violent and terrifying.

It was then that the flash bang explosions and pepper spray began, leading way to the tear gas, pepper balls, and wooden bullets, and setting the stage for everything that would happen in the hours after. I want to make it perfectly clear that prior to this I witnessed not a single rock being thrown, not one broken window, and not a single car damaged. None of the vandalism that would eventually almost fully encompass the coverage of the demonstration had occurred, or was even remotely close to occurring. Quinn noted in his Monday podcast that downtown was a powder keg Saturday afternoon. On this, we could not agree more. What he failed to disclose, however, was who lit that powder keg. It wasn’t the protestors. It wasn’t some amorphous group of white radicals walking up West 3rd. It was the Cleveland Police Department. With an assist from Cuyahoga County Sheriff deputies.

From there, downtown Cleveland became a war zone. It was clear that we were the enemy and the full force of a disturbingly militarized police force was unleashed upon us. Where I was, on the South side of the Justice Center, devolved into a completely chaotic situation. Munitions were fired into the crowd at random, frequently hundreds of yards away into crowds of people just standing around. Other times, the force was directed at the groups of people close to the officers’ lines, who were entirely peaceful. I bounced between those two areas for a couple hours, and could not believe the brazenness of the use of force. They acted like an entity that would face no repercussions and had no accountability. They stoked the anger of people there and incited the violence. Their failure to take water bottles, broccoli heads, and graffiti in stride, and their decision to attack the citizenry they are paid to protect, was the overriding catalyst for everything that followed.

The accounts of those couple hours are well documented by many who were there. Legal observers were targeted. Countless people were injured. My partner was hit directly with one of their gas canisters in the leg. At no point did she or I do anything violent. I was trying to protect the injured near me as best I could and she was offering the phone number to a legal aid service to any and all she could.

And that’s why I was hoping I would get more than just coverage of rioters, looters, damaged businesses, and an organized set of violent acts. This demonstration was about the murder of black people at the hands of the police. I was there to stand up for people who are marginalized and brutalized by our society, and to stand up to the institutions that perpetuate that marginalization and brutalization. As were millions across our country. And like many of them, we were met with a contempt and a violence that only affirms why we were there in the first place. That should have been the main story. That’s what needs to be conveyed to the people who have never had any negative encounters with the police.

And if all that isn’t enough, maybe this will be. As my partner and I exited the demonstration in front of the Justice Center, we were targeted by police and shot with wooden bullets without provocation or reason. We had walked to the West side of the complex, heading South down West 3rd. The area was mostly deserted. We were slowly walking, my partner was taking a few pictures with her phone. Absolutely nothing was happening in this area. And two police officers emerged from a broken window in the Justice Center and shot us with wooden bullets.

My partner first, in the back of her shoulder as she shielded her face, and then myself when I turned to go to her. What they did can only be summarized as a violent assault by police officers. And that’s nothing compared to the experiences of countless others, both now and in the past

There are fundamental problems here. Both within our institutions and within the media that is supposed to hold them to account. How can officers act like they did with no consequence? Where are the investigations into them, who would even conduct those investigations, and who is going to hold the investigators to account? Where do these officers normally work? Which neighborhoods? Surely they aren’t just sitting in storage in some basement waiting for a protest to materialize. What are the elected officials and appointed people with power doing about all of this? How does this kind of coverage affect the attitudes of white suburbanites?

Whatever it is, it’s not journalism. And whatever happened on Saturday wasn’t policing. Or maybe it was, actually. And maybe spouting off excuses for the Mayor and the Cleveland Police Department is journalism, too. Maybe we still have a long way to go to try and fix the entrenched problems of our society. All I know is that it would be easier with the Fourth Estate in our corner. And it would be easier if those sworn to protect and serve didn’t get to terrorize the citizenry with impunity.
Scroll to read more Cleveland News articles
Join the Cleveland Scene Press Club