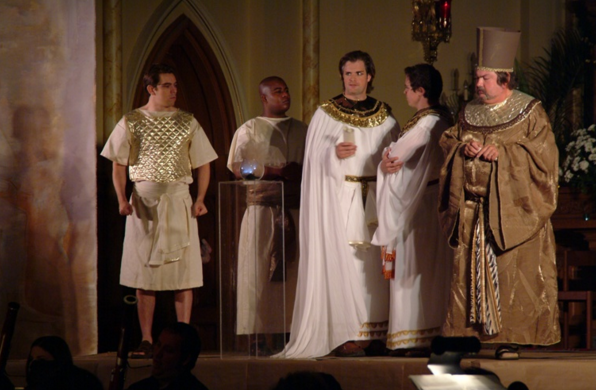 Courtesy Opera Circle Cleveland
Here are five post-Thanksgiving, pre-Christmas events we can highly recommend during the next seven days. Two of them feature multiple performances around metropolitan Cleveland.

Opera Circle Cleveland continues its free, itinerant performances of Pietro Mascagni’s 50-minute opera, Zanetto, calling in at Nighttown on Wednesday, November 30 at 7:00 pm, at the Barlow Community Center in Hudson on Saturday, December 3 at 7:30 pm, and at the Chagrin Concert Series at Valley Lutheran Church in Chagrin Falls on Sunday, December 4 at 3:00 pm. Dorota Sobieska and Megan Thompson take the roles of Silvia and Zanetto in this Renaissance mini-drama set in Tuscany, and pianist Jacek Sobieski and violinist/violist Wanda Sobieska serve as the mini-orchestra.

The professional singers of Ross Duffin’s Quire Cleveland will produce the eighth edition of their popular “Carols for Quire” this weekend, beginning on Friday, December 2 at 7:30 pm at Trinity Cathedral in downtown Cleveland. Quire swings down to Akron for the second performance on Saturday, December 3 at 7:30 pm at St. Paul’s Episcopal Church, then back up to Cleveland for the third, on Sunday, December 4 at 3:00 pm in Historic St. Peter’s Church in downtown Cleveland. Tickets can be pre-purchased online.

Tim Weiss’s terrific Contemporary Music Ensemble from the Oberlin Conservatory of Music will team up with faculty pianist Haewon Song for its second concert of the season in Gartner Auditorium at the Cleveland Museum of Art on Sunday, December 4 at 2:00 pm. Song will be featured in Judith Weir’s 1997 Piano Concerto, bracketed between Jacob Druckman’s 1995 Counterpoise and Augusta Read Thomas’s Selene (Moon Chariot Rituals), dating from 2014. Also opening on Sunday is the exhibit Albert Oehlen: Woods near Oehle, which features a new composition by Oehlen and Swiss musician Michael Wertmüller as part of a multimedia installation. Here’s an opportunity to spend a visually and aurally stimulating afternoon at one of the nation’s great museums (and enjoy lunch in the Atrium before the concert). Order tickets online or purchase at the door.

Looking ahead to next week, the Juilliard Quartet will come to town on Tuesday, December 6 for a 7:30 pm concert at Plymouth Church in Shaker Heights on the Cleveland Chamber Music Society series. Formed in 1946 at the famous New York music school, the string quartet added cellist Astrid Schween to its roster at the beginning of this season — making her the sixteenth musician to play in the ensemble, and the first woman. The Juilliard will serve up a dramatic program that includes Haydn’s Quartet in f, Op. 20, No. 5, Bartók’s Quartet No. 1, and Beethoven’s Quartet in B-flat, Op. 130 — nicknamed “Große Fuge” for its wild final movement. (Beethoven’s publisher, afraid to publish the work with its original finale, made the composer write an alternate, but the Juilliard will play the piece the way Beethoven wanted it.) Tickets can be ordered online.

And just a reminder that The Cleveland Orchestra will join Pennsylvania Ballet for seven performances of George Balanchine’s The Nutcracker at the State Theater in Playhouse Square beginning on Wednesday, December 30 and continuing through the weekend. You don’t often get to hear Tchaikovsky’s score played by such a distinguished pit orchestra. Brett Mitchell conducts.