Order Your Free COVID-19 Tests by Sept. 2, Because the U.S. Government Is Halting the Program

Congress hasn't approved additional funding, despite the sustained spike in people infected with the Omicron variant. 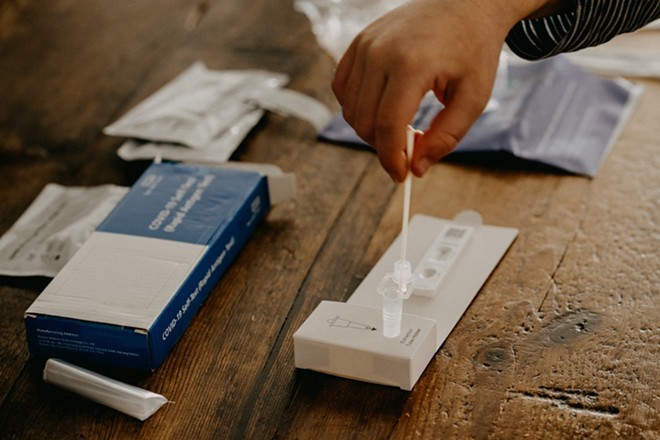 Ohioans looking for free at-home COVID-19 testing kits from the federal government should make their requests soon – the feds are pausing the program at the end of this week.

On Sept. 2, the U.S. government will stop filling orders for the free COVID-19 tests that have been available to all residents since January. Residents have been able to request several tests at a time over three rounds, for a total of 16 tests. The feds launched rounds in January, March and May, with tests delivered by the U.S. Postal Service.

A note on COVID.gov reads, "Ordering through this program will be suspended on Friday, September 2 because Congress hasn't provided additional funding to replenish the nation's stockpile of tests."

As of press time, the website for the free tests still works.

When the government initially launched the free program at the beginning of the year, the nation's COVID-19 cases, hospitalizations and deaths were spiking once again due to the fast-spreading Omicron variant of the coronavirus. At the time, community testing sites were crowded or closed and at-home kits largely were gone from pharmacy shelves. Ohio and Kentucky particularly had severe spikes in COVID-19 cases.

In January, Dr. Richard Lofgren, UC Health's former president and CEO, said of Omicron, "It truly doubles the number of cases every two to three days. It's a math problem. And though a smaller number of people require hospitalization, a small number on a large number is a very large number of individuals. We are in the process of overwhelming our healthcare systems."

COVID-19 numbers climbed again this summer due to fewer safety protocols and more gatherings. Experts have said that both the Omicron and Delta variants largely were to blame.