Our Lady of Lemons

At a charity car dealership, one driver's wreck is another's resurrection. 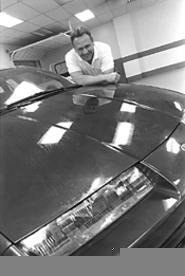 Walter Novak
Mark Tolar takes a moment to reflect.
Ms. Oldsmobile Cutlass still has some life left in her, though her chrome is dented and her satiny blue skirt edged in rust lace. A former family car, she has many fond memories of trips to the supermarket and the Grand Canyon, the kids in back, flogging each other with rolled-up road atlases.

Old age has drained her fuel efficiency, but not her spirit, so she's staging her second incarnation at Our Lady of the Wayside Used Car Lot. The Brookpark Road dealership doesn't carry dashboard saints or plastic rosaries draped from rearview mirrors -- just lots of old cars donated by people who want to claim a charity deduction on their income tax. The cars are resold, with 85 percent of the proceeds going to the namesake Cleveland nonprofit that runs group homes for the mentally and physically disabled.

Lot manager Mark Tolar says that, although his job might sound hard, it really doesn't involve much wheeling and dealing. Yes, in a way he's the epitome of used-car salesmen, transforming untouchables into desirables. On the other hand, in these days of brand-new SUVs that cost more than a bungalow, old clunkers that still run can pretty well sell themselves.

His pitch is simple: "We tell you what's wrong with the car. If you pull the dipstick out and it looks like mud, I'd say it's probably not a good car to buy. We don't do financing, but you can test-drive it, have your mechanic look at it." The St. Vincent de Paul Society also deals in cheap Catholic cars, but they're sold at auction, so you can't try 'em before you buy.

His cargo pants and running shoes a far cry from the regulation leisure suit of his used-car-salesmen forebears, Tolar sets his lunch on his desk around noon. Sometimes it languishes there, uneaten, until 2:30 or 3. The mere act of sitting reminds him of things left undone, so his life is a constant struggle between lowering himself in his chair and running across the room.

Even so, "This is our slow time," Tolar says, admiring the showroom carpet he just scrubbed clean of a year's worth of oil spots. "Everybody tries to get their car in by the end of the year for the tax deduction. Now through March, we don't get much business."

Sales also slump whenever 20/20 uncovers some big charity used-car-lot scam. Then all charity used-car lots feel the pain. "It's like boom! People immediately start asking questions," Tolar says. "I explain that we're reliable because all the money goes to one legit charity, Our Lady of the Wayside, not Mamma, Papa, Sister of Our Joe Schmoes."

A former hospital equipment repairman, the 44-year-old father of five was initially reluctant to change careers. A promised pay increase eased his doubts, as did a tour of an Our Lady of the Wayside group home. "When I saw where the money was going, that did it." On the tour, he was especially impressed by the "very relaxing reclining chairs in the lobby" and a space-age chamber fitted with fiberoptic lights, used to measure residents' attention spans. "I'm standing in there thinking, Whoa, I'd like to have this in my house."

Tolar works alongside Tim Browand, a 35ish man with a wry grin and a rockabilly hairstyle. Browand is the lot's resident "troubleshooter," evaluating the condition of the cars when they come in.

A regular-turned-employee, Browand used to fix up cars he'd purchased off the lot and then resell them. Now, the regulars include six or seven for-profit used-car dealers and a construction worker named José Castro who visits every day, just to see what they have, like he's checking out grapefruit at the West Side Market.

Today, Castro actually called the showroom before making the trip. "He sounded sick, like he had a cold or something," says Browand. "But he was going to come in anyway, if we had anything he liked." They didn't, just a Honda Accord with 270,000 miles and a baby-blue '88 Fiat, perfect for the sorority sister on a budget.

The only thing more common than dead batteries are inquiries from desperate people seeking a different kind of charity. "We get hundreds of calls: 'How do I get a free car?'" says Tolar. He says he's heard of the county's free-car program, but he's not sure who runs it.

Actually, that program is on hold, because it was too much of a drain on resources. Called Car Keys to Success, it provided eligible families with $2,500 for a down payment on a used car, as well as a low-interest loan they had to pay off themselves. Although 900 welfare-to-work recipients applied, only 16 met the qualifications to finance cars.

At Our Lady, $500 down and no monthly payments will get you something that runs -- barely. "I'm not a magician," says Tolar. "People say, 'I want a dependable car for my daughter for $500,' and I say that's an impossible dream."

For his own kids, he snagged a '94 Olds and a '95 Saturn from the lot. "I've probably had the worst luck of anybody," he says. "I had to replace the transmission on one, the transmission and the timing belt on the other. But I got a good price.

"If I buy that car for $4,000 and it breaks down, I'm an idiot. But if I buy it here, I can say I'm buying lemons, and I don't have to worry, because I know what I'm getting." Spoken like a true salesman.