Overbuilt Retail Has Left Dead Malls Strewn Across Northeast Ohio. Will Severance Town Center Be Next? 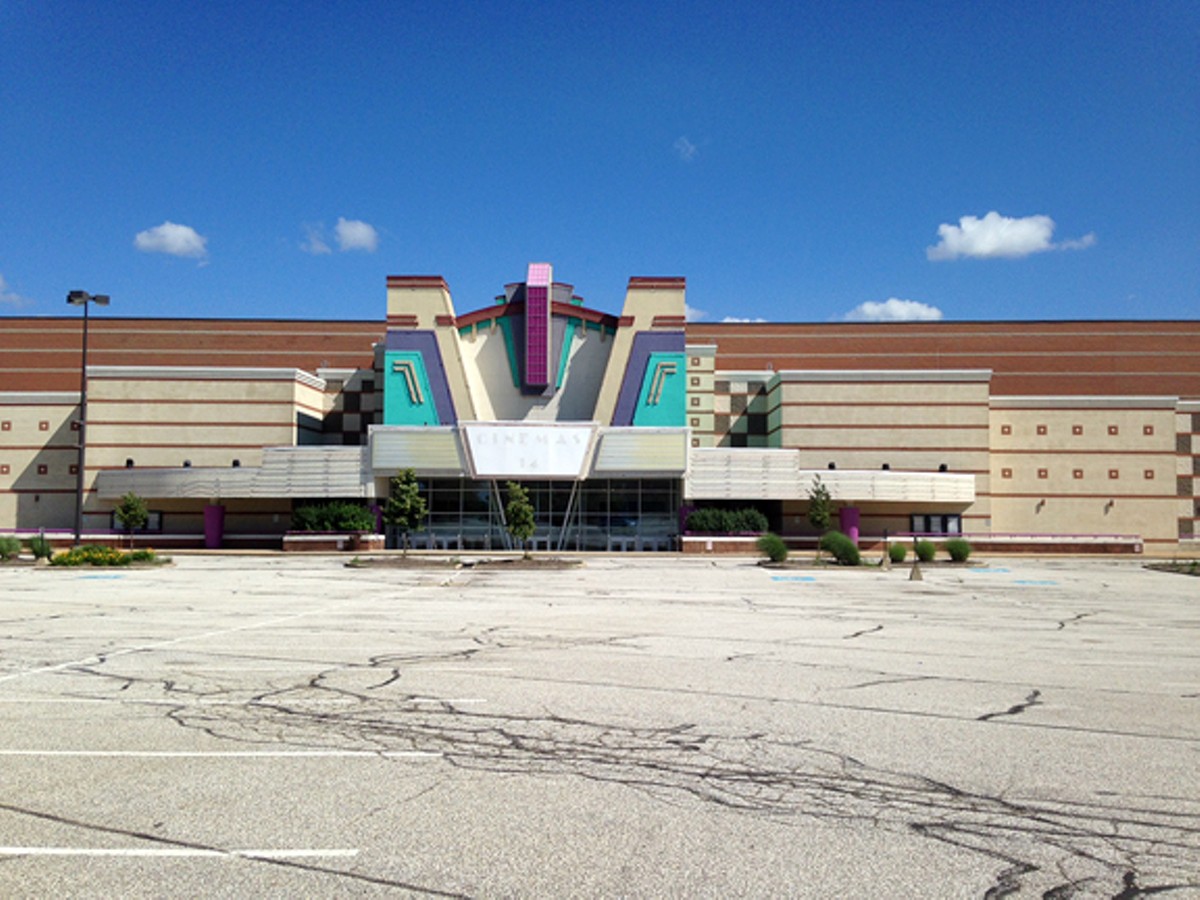 Retail is a notoriously tough business, and these days, malls seem to lose their luster within half a generation as consumers change their shopping habits and shiny, new competitors are built.

These three malls, located within just a few miles of each other, are distressed properties, to say the least. With the departure of Macy's earlier this year, Richmond Town Square is effectively a ghost town, with only Sears and JCPenney remaining as anchor tenants. University Square, built with much fanfare in 2003 as Northeast Ohio's first multi-story retail complex, is now empty except for Macy's, Target and a few others. It's currently being managed by a receiver.

Severance, which opened in 1963 as Ohio's first indoor mall, was reinvented as an outward-facing shopping center in the late '90s but could be approaching "dead mall" status just 15 years later, a sort of life expectancy unseen in the architecture world outside of sports stadiums and arenas. Walmart's departure two years ago for the greener grass at Oakwood Commons in South Euclid sent the mall into a downward spiral. Severance is now 35 percent vacant and in foreclosure.

With retail largely overbuilt in Northeast Ohio, experts say the only way that malls can grow is to shuffle the pieces around on the checkerboard. That's what's happened with Oakwood and Severance. The result may be good, at least on a superficial level, for the community on the receiving end of the deal, but it's bad for Northeast Ohio. When Walmart left Severance, it created about 85 low-paying jobs, transferred 200 jobs one mile down the road, and left behind a hot mess.

"There's no way we can support all the retail we have, and there's too much retail [in Northeast Ohio]," says Nathan Wynveen of Newmark Grubb Knight Frank, a commercial brokerage firm in downtown Cleveland. He cites the fact that retail vacancy rates in Northeast Ohio climbed from 7.5 percent in 2006 to 12.7 percent in 2012, though they recently dipped back down to 9 percent.

In many ways, it's a tale of two markets. Class A spaces such as lifestyle centers are doing quite well, and Wynveen says discount retailers like Walmart are also still thriving. Middle-market retail, on the other hand, is being squeezed by online sales. That means that Class B and C shopping centers — like Severance — are on the wrong end of the economics. To be successful, they'll have to reinvent themselves. In the future, they might not even be malls.

"A mall like Severance has a choice when found at a competitive disadvantage — either it's got to grow and stay with the same basic format, or it has to morph, change into a different format, or it's going to die," says Roby Simons, a professor at the Levin College of Urban Affairs at Cleveland State University. "Unless you replace Walmart with a tenant of the same stature — and there's a short list there — odds are it's not going to remain the same format."

Wanted: A developer with vision

The owners of Severance, Syndicated Equities out of Chicago, defaulted on a $43 million loan when Walmart departed the shopping center in 2013. The loss of Walmart triggered a rolling wave of rent reductions that were part of the lease agreements for other tenants in the shopping center. More recently, IHOP closed and Regal Cinemas decided against renewing their lease.

Severance is still anchored by Home Depot and Dave's Market, both of which are locked into multi-year leases, as well as many smaller tenants. In recent months, four existing tenants, including Marshall's, have renewed their leases. Still, the gigantic empty Walmart has left a gaping hole in the shopping center — the global retail giant represented 20 percent of the square footage there — and the old cinemas are surrounded by a cracked, sad-looking parking lot.

Keith Hamulak, vice president with C.B. Richard Ellis, the court-appointed property manager for Severance, says the news about the property is mixed. "The truth about Severance is there are several retailers there that are doing well, and there are retailers that are not doing well at all," he says, citing Home Depot and Dave's as success stories. "But the exodus of Walmart dumped 120,000 square feet back into the market and the back side of the mall needs to be repurposed."

Hamulak has reached out to potential tenants about the former Walmart space, but he hasn't yet landed a deal. Anchor tenants are typically loss leaders for a developer — meaning the owner doesn't make money off them, but they help to lure smaller money-making tenants — but the formula doesn't work here. With Severance, there's simply no interest from smaller operators. There's plenty of space to fill in the complex, but it's languishing until a new owner is in place.

Colette Gibbons, court-appointed receiver of Severance and an attorney with the law firm Ice Miller LLC, says that a new vision for the shopping center is needed before desirable tenants will venture in. "High-end tenants and nicer restaurants are not going to make a move unless there's an overall plan for the center," she says.

"I think it has to be re-envisioned," she continues. "It's too big right now, and it's not updated the way a lot of the lifestyle shopping centers are. It doesn't have the amenities, like coffee shops, restaurants, green space and areas for kids to play. The people of Cleveland Heights would like a facility like this where they could head over on a Sunday and hang out for a couple of hours. They would like a nice development in the center part of their city."

Perhaps the worst scenario would be if Severance hung on by its fingertips in its current dilapidated status. Yet Gibbons says there's hope: Severance Town Center's mortgage is currently for sale and there's interest from developers. There are three possibilities: The note could be sold and the buyer could purchase it back from foreclosure, an entirely different note holder could purchase it at that time, or Gibbons as receiver could sell the note to a new entity. No one knows exactly which scenario will play out, yet one thing is needed above all else.

"They need a developer with vision," she says.

You need but your own two eyes to see that there's too much retail space in Northeast Ohio, yet the numbers help paint a broader picture, revealing with startling clarity why this is a regional crisis.

According to a 2007 study completed by professor James Kastelic of Cleveland State University's Levin College of Urban Affairs, Northeast Ohio has a retail surplus of just over 22 million square feet. Between 2000 and 2007, the study shows, Cuyahoga County's population declined by 6 percent while its retail space grew by 5 percent. Although the study has not been updated, several new properties have come online since it was completed, including Oakwood Commons.

Dead malls and overbuilt retail are a vicious national problem. "Since 2010, more than two dozen enclosed shopping malls have been closed, and an additional 60 are on the brink, according to Green Street Advisors, which tracks the mall industry," reported the New York Times in a Jan. 3, 2015, article called "The Economics (and Nostalgia) of Dead Malls."

Given the seismic shift that's taken place in the retail world since Severance was redeveloped in the late 1990s, the shopping center was certainly vulnerable. Additionally, real estate insiders say the property was not well managed and its previous owners had a capital structure that did not incentivize putting new investment into the property. Now, with Oakwood, Cedar Center North and University Square minutes away, the shopping center will never go back to what it was.

Or as Wynveen puts it: "The strip mall is totally done."

But what will Severance morph into? Townhomes? Offices? A sleek techie incubator? A vast eyeball-stretching indoor soccer complex? A suburban pot farm, if marijuana is eventually legalized in Ohio? No one can say — but some local leaders say keep an open mind.

"The future of Severance will require some mix of uses," says Tanisha Briley, Cleveland Heights' city manager. "We can have our wish list, and that's all well and good, but the market dynamics will determine what can be sustainable. We want a vibrant, sustainable mix of uses at the site — it could be commercial, housing, light industrial or office."

This spring, Cleveland Heights officials announced that they would like to work with the new owner of Severance to lift the use restrictions there. Due to provisions in the current mortgage, other uses — for example, turning Walmart into a rock climbing gym — are not allowed. "We can't get rid of the rules until the new owner is in place," says Briley. "We want to be helpful."