The county's fight over document fees yields a dubious alliance 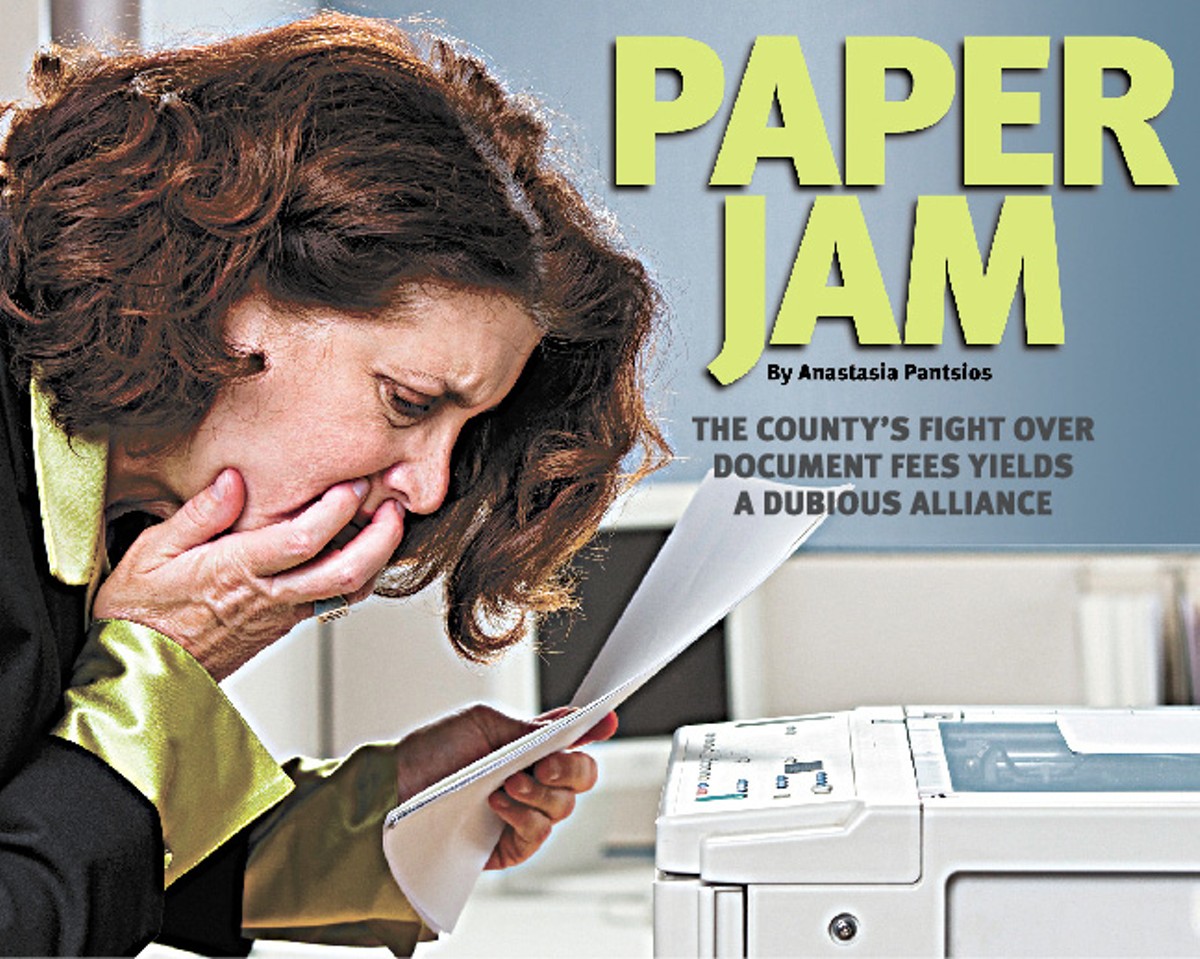 Five years before Cuyahoga County Recorder Pat O'Malley resigned in May 2008 — one of the first dominoes to fall in the county's ongoing shame game — he quietly closed a deal that garnered little interest at the time. It was a pact with Data Trace, a California company that specializes in snapping up title and tax documents, then customizing and re-selling the information.

Ohio law provides that anyone may receive a copy of any document filed with a county recorder's office for $2 a page. But there are no stipulations on what a disc loaded with an entire day's records — sometimes more than 1,000 documents — should cost. To O'Malley, $50 a day sounded about right.

That deal has since blown up into a controversy that involves a lawsuit before the state's highest court and a newspaper's apparent role as judge and jury in the case despite a conflict of interest.

When Lillian Greene took over the recorder's office following O'Malley's departure to face obscenity charges, she discovered the memo striking the deal. After researching the terms, she decided that it amounted to a gift to Data Trace at taxpayer expense: 1,000 copied documents a day — most of them multiple pages — would cost thousands of dollars if any citizen wanted them. So she canceled the deal.

In Greene's estimation, Ohio law required the $2 per page charge regardless of the copy's medium. Data Trace disagreed and sued, taking its case to the Ohio Supreme Court, which has jurisdiction in matters involving interpretation of state law.

Data Trace is represented by a legal team headed by David Marburger, described in a 2009 Plain Dealer article as an attorney "who often represents The Plain Dealer on issues involving open meetings and public records."

Greene declined to have the recorder's office represented by the county prosecutor's office, believing it had ties to Marburger and would not be able to serve taxpayer interests. Instead she hired David Movius, an outside lawyer who specializes in technology issues, allocating $25,000 of the office's funds for legal expenses. Greene later lost her job following the reorganization of county government; now retired, she serves as a visiting judge in Cuyahoga County. But Movius still represents the recorder's office in the case.

Back in November, the suit was dismissed at Movius' request because the company was not registered to do business in Ohio. Data Trace has since registered and refiled the case early this year. Now the battle has been rekindled over what constitutes a "copy" and who is wasting whose money. And Data Trace has one key ally on its side.

Without clear legal guidance, recorder's offices across the state have improvised fees for requests like Data Trace's. Some public documents are required by law to be provided "at cost," but copies of documents filed in a recorder's office were set at $2 each by the legislature to help fund recorder's offices and a state housing program. So the question comes down to whether the documents on CD are each the equivalent of photocopied documents — and therefore subject to the $2 per page fee — or something else, to be provided at cost, in accordance with state law.

Lucas County (Toledo) charges only $1.25 per CD, interpreting Ohio law as mandating copies at cost unless Ohio revised code says otherwise — and the code is silent on CDs.

Data Trace also gets copies of all documents filed in Franklin County (Columbus). According to Gabe Spiegel of the recorder's office there: "If any customer wishes to buy one day's worth of image data, the charge would be $20. The charge is based on time and material."

Spiegel's office believes this is what the law requires. "[It's] the cost of the time spent by the lowest paid employee competent to perform the task, the actual amount paid to outside private contractors employed by the bureau, or the actual cost incurred to create computer programs to make the special extraction," he says.

Meanwhile, Montgomery County (Dayton) doesn't even entertain CD requests. "We would have to do extensive programming to be able to provide information on CD," says Recorder Willis Blackshear. "It's not something we do on a daily basis for our office." Instead, the office uses an online imaging service that, for $300 a year, allows subscribers to access documents online and print whatever they want.

Attorney Marburger believes that since the CDs Data Trace requests are merely copies of backup discs that the Cuyahoga office routinely maintains anyway, "Each CD is one record. When you copy it, it's done simultaneously and it doesn't matter if there's one record or a thousand. It takes a minute or two. The CD costs 31 cents, so it costs them maybe 35 cents."

"If statute says documents are $2 a page, how do you give revenue-generating documents to somebody for nothing?" says Greene. "It's about the money the county is missing out on. We're losing all this money we could be generating from this company."

Marburger counters: "If you were Data Trace, and a court ruling came down that said you could only dub CDs at $2 a page, a year's worth of CDs would be a million and a half to two million dollars. Would you say, 'OK, I'll pay that'? If the county loses, the companies will pay 35 or 40 cents a disc. I have offered to the county dozens of times that we will pay far more than that — even more than $50 a CD. They would not budge one inch."

But even such a compromise would fall short of a legal clarification; until the law dictates the appropriate price, disagreements are bound to continue. For that reason, the lawsuit challenge by the Cuyahoga Recorder's Office — and particularly its request that the Ohio Supreme Court interpret how state law should be applied or to order the legislature to clarify its intent — would seem to make sense.

In the wake of Movius' request to dismiss the initial case, Marburger and Movius exchanged e-mails that Movius later shared with Scene. "By this latest invalid hypertechnical, frivolous position, you're just racking up your own client's liability for attorneys' fees," Marburger charged on December 18.

On December 20 he followed up with: "You are wasting Cuyahoga County taxpayers' money with your invalid shenanigans, which I think deserves a little publicity."

Movius takes that as a not-so-subtle hint to involve The Plain Dealer. The paper's subsequent coverage of the case has at best been confusing, at worst misleading — and it has strongly pushed Marburger's contention that fighting the case only squanders taxpayer money.

Neither a March 17 article by Laura Johnston nor an editorial two days later even mentions Data Trace or explains what the company does. Johnston's article introduces Marburger only as "a lawyer and public records expert who contends in a lawsuit that the county's legal interpretation is wrong." It does not make clear that Marburger — who has represented The Plain Dealer in dozens of disputes — represents Data Trace in this case.

Johnston's article repeatedly refers to apparent incompetence of recorder's office staff. It says Greene's former chief of staff, John Kandah, "testified during a deposition that he did not know deeds and mortgages are available to the public." But the transcript shows that Kandah was responding to a complicated question about a specific deed.

The story ridiculed another employee, Larry Patterson, for attempting to be technical about what constitutes a "photocopy" for the purposes of the fee schedule set by Ohio law. Yet that dispute is at the heart of the case.

Also included was a vague, confusing statement from county council member Mike Gallagher, who was said to oppose fighting Data Trace's lawsuit in the story but who actually believes the county should move ahead with it. "When the reporter called me, I made it clear that I needed to look into this because I don't have any background," Gallagher says now.

"Issues like this are ripe for the courts to make a decision. It's going to get there eventually, so the sooner the better. It would behoove the county to move ahead with the lawsuit and find out what [the law] intends."

Two days after the Johnston article, a PD editorial likened Patterson's "photocopy" testimony to a Comedy Central skit. It contended that Patterson "apparently tries to pick the public's pocket to the tune of hundreds of thousands of dollars under the guise of charging for photocopies." Problem is, Patterson's duties do not even include setting fees.

"Here's a bright idea for reformed county government," the editorial continued: "End the restrictions, and the lawsuit, by restoring public access to records collected and stored on the public's dime, and highlight the commitment to transparency and open government as the sun sets on Sunshine Week," a reference to the newspaper industry's educational coverage of public record laws.

It seemed odd enough that The PD editorial board would go to bat for its own lawyer's interests. Just as weird was the fact that Data Trace's attempt to receive the documents and lower fees has little to do with transparency and open government. Documents filed with the recorder's office are accessible both online and in person to any citizen who wants to see or copy them; there is nothing that needs "restoring."

"It's not a public records case," says Movius. "Everyone agrees that these companies [an Illinois title search firm called Property Insight is also involved] can have the documents they want. The companies agree they need to pay a fee for them. It's about what that fee should be. They're trying to use the public records act to get a deal everyone else doesn't get.

"What the county wants is for Data Trace to pay the same amount that citizens in Cuyahoga County pay. No special deals. Just don't try to pretend it's a public records issue when it's not."

Marburger claims that Data Trace would have to pass increased fees along to the title companies it services. Those companies would then pass the charges along to banks, and banks would pass them to mortgage seekers. Having Data Trace employees manually download free documents from the recorder's website, he adds, would require 30 to 40 man hours per day.

Marburger tells Scene that he did not push his case on The PD in any way. (Johnston did not respond to requests for comment for this story. Editorial page director Elizabeth Sullivan, asked via e-mail about the paper's decision to editorialize on a suit involving its own lawyer, said only that The PD stands by the editorial and referred Scene to the attorneys in the case.)

In the end, who is right doesn't seem nearly as obvious as The Plain Dealer insists. But if the case ends in the Supreme Court or the legislature setting a clear fee schedule for the services Data Trace wants, it will have been money well spent.