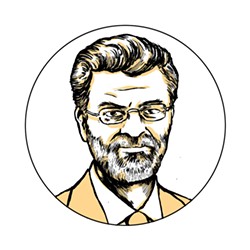 In a lengthy editorial, the editors admitted that Jackson probably shouldn’t be seeking a fourth four-year term, or at least that a fourth term "may be" one too many for the weary incumbent: "The best and brightest of his administration may soon move on, leaving behind Jackson’s second-raters, the ones he’s irrationally protected all these years.” But in the editorial board's view, the field of challengers simply couldn’t match Jackson's experience.

Given Cleveland.com's general antipathy toward the causes SEIU has supported, it was somewhat surprising to see their support for Jeff Johnson. The editorial suggested that Johnson was Jackson's strongest challenger, a "smart, nuanced, balanced" politician with knowledge of the city, who had "largely avoid[ed] grandstanding." For Cleveland.com, though, Johnson's 1998 extortion conviction remained an "insurmountable" negative. Zack Reed, to the editors, has presented some good ideas but not enough concrete policy and remains too concerned with bashing the Mayor as a campaign strategy.

The editorial, to its credit, said that Jackson would be wise to listen to the fresh ideas of the his competition, especially to the workforce training plans of Brandon Chrostowski and to the various ideas of Tony Madalone (the most popular of which was his plan for a City Department of Transportation).

Cleveland.com Editor Chris Quinn has noted that Frank Jackson is running entirely on his track record, not on what he hopes to accomplish in a fourth (and presumably final) term. In fact, Jackson has presented no plans at all for what he intends to do over the next four years, but his challengers have not yet seized upon this.

When Jackson challenged the field at the mayoral debate Friday by asking what his eight competitors had accomplished — “What have you done?” — their retort should have been: “But what will you do?”