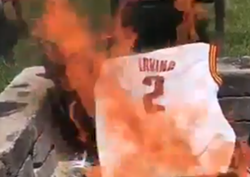 It looks like some Cavs fans with a flair for the dramatic have taken Cleveland.com's recent video, "Top 5 places in Cleveland to eventually burn Kyrie Irving's jersey," to heart.

Irving's potential departure from the Cavs is muddled in hypotheticals and rampant conjecture, but video footage of him appearing to make fun of LeBron James with Steph Curry — not to mention the endless stream of sourcey rumors about his wanting to leave — have sparked anger among fans.

(Watch the video of Irving's jersey going up in flames below.)

Jersey-burning in the city was more mainstream in 2010, when Clevelanders were incensed by LeBron heading South. But Irving hasn't officially left yet, and setting fire to a $50 piece of clothing is a pretty expensive social media stunt.

Plus, you'll probably regret it if he stays — don't be the guy who wore a charred LeBron jersey to a game upon his return in 2014.