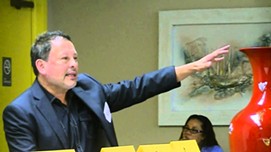 YouTube
Max Rodas
Max Rodas, one of ten community members selected in September to sit on the Cleveland Community Police Commission, has resigned.

The Latino pastor and Executive Director of Nueva Luz told Scene in an interview Friday that he simply didn't anticipate the amount of work that being on the commission would entail. He announced his resignation Wednesday.

"I really agonized over this decision," he said. "And I think the commission is a really important body doing vital work, but in my opinion — and it's just my opinion —the work is too much for this small group."

The Community Police Commission was established by the Consent Decree as a 13-member body that would make recommendations to the police on behalf of the community and keep citizens apprised of ongoing reform. Per the Consent Decree, one member from each of the city's three police unions would also be represented.

Rodas said he applied, in part, because he was asked to. He is a prominent face in local Latino affairs, actively engaged in both the Hispanic Alliance Inc. and the Hispanic Roundtable. Moreover, he said, having lived in Cleveland off-and-on for 40 years, he has witnessed a great deal of economic development and didn't want to see the city's progress undone.

"I knew that until we solved this problem of police-community relations, and that's primarily with white officers and communities of color, particularly African-American communities, all of Cleveland's progress was in jeopardy," he said. "That's why I applied."

But membership on the Community Police Commission required not only attendance at regular public meetings, but also at committee meetings — "We have four or five committees and we're all supposed to be on at least one," he said — and substantial reading and correspondence before and after each.

"For me, I felt it was better to resign," he said. "That way, it will open the door for somebody to take my place and do a great job."

Cleveland.com reported Thursday evening that the Commission's co-chair, CSU Marshall Law Dean Craig Boise had also submitted a letter of resignation this week, to Mayor Frank Jackson, but withdrew it "when Consent Decree stakeholders talked him into staying."

Like Rodas, Boise said even though he expected a time commitment when he applied, he had other commitments in addition to his full-time job that made staying on the commission a challenge.

Boise was at an all-day meeting Friday and was unavailable for comment.

Rodas told Scene, in comments that echoed Steve Loomis' when we spoke with him Thursday, that in any group — especially in small groups — "there is a negotiation of power. You've got to figure out who's who and what's what, and that takes time. But the problem is, you have a Consent Decree that has specific timelines, so you can't be bogged down with that kind of work."

The City of Cleveland, for its part, has tried to lighten the load on the volunteer commission members. Law Director Barbara Langhenry said the city has given the commission money to pay staffers and even consultants. (Loomis, on a side note, said he brings a lawyer to every meeting at the union's expense).

But even with those efforts, and despite Co-chair Rhonda Williams' claim that the Commission is "looking for a good balance of time," it's a big gig.

"I think more people on the Commission would lighten the load," Rodas said.