Photographer Lee Sechrist is Shooting Cleveland's Hangovers, One Pain-Riddled Face at a Time 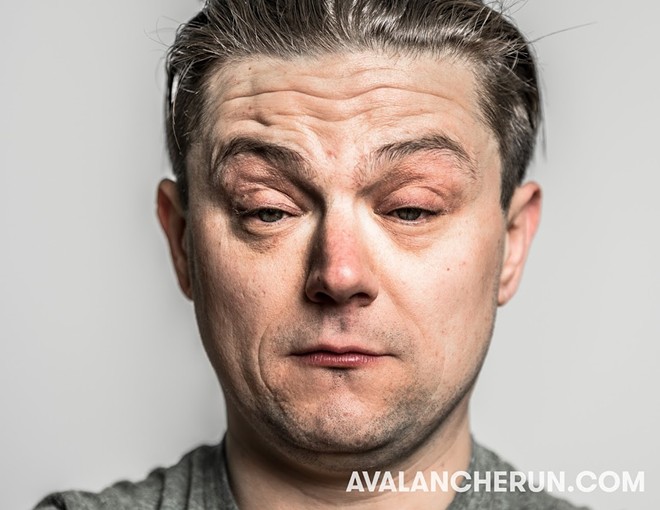 When Lakewood resident Lee Sechrist woke up one recent January morning after a night of drinking he had a gnarly hangover. He’s got a two-year-old son and doesn’t party quite like he used to, so hangovers these days tend to be brutal. This one was particularly bad.

Sechrist felt terrible and his face said as much. He looked in the mirror and the face staring back conveyed exactly how shitty he was feeling. It was a face worth memorializing in a photo. Thankfully Sechrist is a photographer and didn’t have to leave home to document the suffering.

After shooting the photographs he wondered to himself if anyone else might want their hangover similarly documented. He sent out an invite to some friends that he’d make mimosas and have a small hangover party; unfortunately, no one came over. So he just posted the set to Facebook, where it gained a little traction. Eventually Sechrist offered to travel to anyone who was hungover and willing to sit — headaches and nausea and all — for a session. Hell, he’d even bring coffee and bagels.


The weekend is coming... if you think you might feel like this on Saturday or Sunday send me a DM! I'll bring you coffee and a bagel if you let me shoot your hangover. 🥃🥂🍻🚽 Please drink responsibly. Hangovers are stupid. Cleveland area only pls. #overserved #thehangoverfiles #hangoverheadshots #hangover #photography #portrait_perfection #portrait


Some friends took him up on the offer at first and strangers have followed as word has spread. He’s even received messages from people in the middle of the night, as they’re drinking, as they’re preparing for what inevitably comes next, asking if he can shoot them the following morning.

“Just go ahead with the night you were planning on having. Don’t drink anymore on the account of wanting me to take your picture,” Sechrist said. “I don’t think anyone should get hungover on purpose. It’s one of the most awful feelings.”

While it’s certainly not a geographically unique project, Sechrist believes there’s something special about Cleveland’s hangovers. “I think people in Cleveland spend more time hungover than actually drinking," he said. "There’s a brewery popping up on every corner and they usually have beers with over 7% alcohol. Cleveland’s definitely a hard drinking city.”