A downtown casino is the best development idea yet. 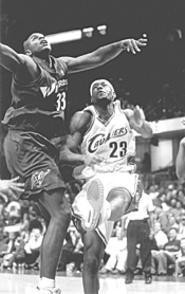 Walter Novak
The real score is in legalizing sports gambling.
"You only need to go to East 30th Street and Payne Avenue," says Councilman Joe Cimperman. It's where you'll find the best argument for a Cleveland casino.

In the morning, people gather to wait for the bus. It's a scene repeated every day from Lakewood to Euclid, where casino buses from Windsor, Niagara Falls, and Detroit collect their customers. "You just watch the dollars leaving on 90," says Cimperman.

Consider it the curse of a moralist state. While Ohio cottons to the lottery, with its sucker bets and million-to-one odds, it sees something sordid in casinos. Betting through gas-station clerks is much less squalid than laying money on green felt, according to this peculiar logic. So we allow millions to leave the state in a fog of diesel fumes.

But now, fittingly enough, a moralist has come to our rescue. Representative Bill Seitz, a Cincinnati Republican and Defense of Marriage Act author, wants to legalize slots at racetracks. To soothe the politics at hand, he's tossing out the possibility of a Cleveland casino. Let his politics be our promise. For more so than any other idea, a casino presents Cleveland with her best development idea yet. Don't take my word for it. Take Detroit's.

Five years ago, the Motor City was in the same place Cleveland is -- only worse. It's been the American Beirut since the '60s riots. Incompetent government, industrial collapse, and middle-class flight only sealed the deal. Sound familiar?

But Detroit had learned what Cleveland had not: that the software and biotech guys weren't going to show. For some odd reason, they weren't interested in impoverished cities with Third World school systems. And they'd demand serious welfare if they were. So Detroit, having already exhausted the arena-convention-center route, chose to legalize casinos.

The usual scolds came out to bray. Casinos would breed crime and destroy families, they yelped. But the underlying message was pure condescension: The mid-to-lower classes, the heart of the gambling faithful, couldn't be trusted with their own money.

Fortunately, city and state leaders weren't so patronizing. They were looking for a smarter play. And this one paid big. Today, Detroit's three casinos employ 7,000 people. Though the pay is somewhat modest -- an average of $26,000 a year -- these are union jobs with full benefits.

By this measure alone, it was a ringing success. But there's a bonus round: Gaming is the rare industry that views high taxes as a cost of business. So taxed it was.

Last year, casinos contributed $91 million to the state and another $111 million to the city, says Roger Martin, spokesman for the Greektown casino. As an industry, "We are the largest taxpayer in Detroit," he proudly notes. And that money isn't just being recycled around the city. Eighty percent comes from the suburbs and beyond -- from places like Cleveland.

"There are a lot of people I've interviewed who say they haven't been downtown in 20 years," says Tina Lam, who covers gaming for the Detroit Free Press. Yet Greektown alone pulls in 15,000 per day, says Martin. It's akin to having a Tribe or Cavs game every day of the year -- and that's just for one casino.

The scolds have also been silenced. Crime in Detroit has actually declined, says Martin. Oddly enough, people with jobs are less inclined to steal.

This isn't to say gaming is a wonder drug. Casinos have done little to spur additional development. "Virtually none," says Lam. Their job is to take money, not spread it around. "I periodically interview restaurants around there, and I always get the same, 'No, our business has not increased.'"

Detroit's compulsive gambling rates are also above the national average, as one might expect from a Rust Belt town, where wagering is less sin than pastime. Then again, gambling doesn't even rank among the main problems leading to financial trouble, credit counselors will tell you. Simple overspending is the undisputed king. If you want to keep peasants from emptying their wallets, outlaw Legacy Village.

"Is it the end-all, be-all?" asks Cimperman. "No, it's not. But Cleveland keeps looking for this monolithic savior."

The councilman even supports pushing the idea further: legalization of sports gambling. While everyone has slots, riverboats, and Indian casinos, only Nevada and offshore internet sites offer full sports betting. Though it would require federal approval, it would also provide Cleveland a chance to step ahead of the crowd, instead of once again stumbling along at the rear.

For the last Super Bowl, 274,000 people visited Vegas, says John Piet, senior research analyst at the city's Convention & Visitors Authority. They bet more than $81 million on the game. And that's in just one weekend.

Cleveland couldn't come close to these crowds. Vegas spent 50 years building the gaudy infrastructure to attract them. But even by stealing just a fraction, this idea would be far more lucrative than any other on the horizon.

Compare this to our current bets. We want to build a convention center, though the convention business has been declining since the mid-'90s, and it will cost us $400 million just to get in the game. We want to remake Euclid Avenue, believing that millions for new trees and really nice bus stops will summon flocks of merchants. We want to move the Shoreway, though there's no money to pay for it.

If anything should be outlawed, it's the people who think this crap up.

But vice -- that's something we've always done well. Our tradition: We build stuff, then we party. And since the days of building stuff are in the rearview mirror, it's time to make partying a full-time job.

If the scolds have a better idea for creating 7,000 union jobs, they should speak now. Otherwise, break out the dice, pour me a shot, and I'll take the T-wolves and 5 over the Kings.