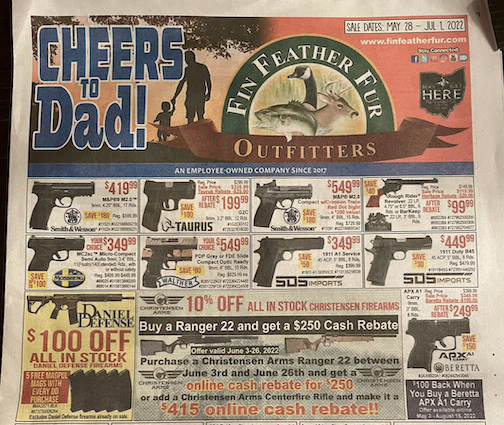 Chris Ronayne
The weekend gun ad in the Plain Dealer


Advance Ohio President and Publisher Bradley Harmon, in a column this morning, apologized to readers for a four-page gun ad that ran in the Plain Dealer over the weekend, just days after the Uvalde school mass shooting and with the country still in mourning over the Buffalo massacre, and announced the paper would no longer accept ads for military-style assault weapons.

"In letters to the editor, text messages, email and conversations on social media, readers expressed disappointment, dismay and anger about the timing of the advertisement," Harmon wrote.

While relaying how firearms ad policies have changed in the past five years — the PD previously decided they could not run on the front page — and explaining why the paper still prints them — the First and Second Amendments — Harmon acknowledged the discord between editorial coverage that has called for bans on assault weapons and ads that sell those very guns, as well as the indecency of publishing them so close on the heels of mass shootings.

Due to those concerns, Harmon announced that assault rifles will no longer be permitted in advertisements.

"They are weapons designed for maximum damage and mass killings. Our Editorial Board, of which I am a member, recently called on elected leaders to reinstate the assault weapons ban that once existed in this country," he wrote. "Having made that call, we would be hypocritical to continue profiting from their sales."

Additionally, Harmon said the paper will now make a concerted effort to track scheduled gun ads " so that we can be sure to pull firearms ads in the days following the kinds of mass shootings we’ve seen too frequently."

Harmon likely felt the paper needed to announce something on that front, but it's a delusional bit of acquiescence and as vague a policy as possible. How many days have to pass before a gun ad doesn't violate this vague sense of decorum? How many victims must there be for a mass shooting to qualify as an event deadly and scarring enough to merit pulling the ad? Does the mass shooting have to be national news?

"These steps will not satisfy everyone, but I feel they are fair, giving our desire to balance the rights provided in our Constitution," Harmon concluded. "Thank you to everyone who communicated with us about this. We know how privileged we are to be a part of your lives. You allow us into your homes, and we must guard against needless offense. I’m sorry that it happened here."