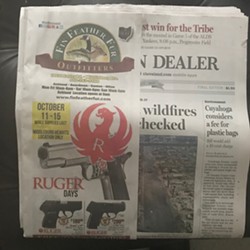 Twitter: @RussWKYC
"Why would a paper that editorializes for sensible gun control publish a big advertisement for guns?" asked Ohio's largest newspaper in a Facebook post Thursday.

"Because we’re all about free speech – in news stories, in opinion pieces, and in advertisements... We try extremely hard not to stifle speech, even if it disagrees with our own opinions. We set standards for news coverage, commentary, and advertising, and we do our best to honor them. Those standards allow advertisements by legitimate businesses selling legal products. Guns sales are legal in Ohio, and the dealer is a well-established, locally owned company."

If you missed it, the advertisement in question was a partial cover wrap on the PD's Wednesday print edition. It promoted a "Ruger Days" sale at the Middleburg Heights location of Fin Feather Fur, an outdoor retailer. The ad displayed three Ruger handguns and the red Ruger logo — some sort of dragon or mythic goose.

The Plain Dealer's justification is galling and disingenuous for a number of reasons, not least of which is the fact that the ad surely netted them significant revenue. Publications are conscripted into this ethical-commercial algebra all the time: Is a big, ugly, obtrusive ad worth a big, handsome, salary-saving paycheck? (The bigger and more obtrusive the ad — see above — the bigger and more handsome the paycheck. That's how ads work.)

To the disgust, or at least to the dismay, of editorial staffs everywhere, the answer is often yes. The big ugly ad is worth it. Sales staffs go out for drinks after major ad sales like this, by the way. They don't apologize. But for the paper's leadership, the decision to publish is a vexed one, and exponentially more so when the ad in question is for a gun sale less than two weeks after a mass shooting. The PD's savvy account executives must have charged a premium because the wrap looked so heinously callous and gauche. You can bet there were tense conversations specifically about potential blowback to the ad, weighing whether or not it was worth it, long before someone concocted the free speech nonsense. If it didn't occur to the PD's leadership that the ad looked heinously callous and gauche; if they didn't feel that anything was sacrificed or surrendered by publishing a big gun ad after the deadliest mass shooting in modern U.S. history; if they just published it, as opposed to publishing it anyway — it's even worse than it already looks.

To cloak what was almost certainly a financial decision in the language of free speech is just so transparently specious. You can feel the Niagaran spray of all the Facebook commenters spitting out their coffee onto their computer screens. Free speech? Are they serious? (No one but the radical gun-loving fringes are fooled.)

And the most indigestible component of the self-edifying justification is the larger gun-sales picture. As the PD well knows, stocks for major gun companies — including Sturm Ruger — always rise after mass shootings.

The awful choreography of these things, it never varies. https://t.co/zEsle9t6Tc

This happens chiefly for two reasons. One: After horrific, highly public mass shootings, Americans naturally feel a little less safe. They want to arm themselves against terrorists. They want to be prepared should a shooter come to their town. So they go out and buy guns. Two: There is widespread fear that, after mass shootings, stricter gun regulations will be enforced. Consumers flock to places like Fin Feather Fur to stock up on weapons before the government comes knocking with the intent to infringe upon their dearly-held second amendment rights.

It's sickening to imagine gun executives salivating over news coverage of the Las Vegas massacre, but that's more or less what was happening — "In the Swiftian parody," Tweeted the New Yorker's Patrick Radden Keefe, "there would be sponsorship agreements." And while the PD can boast of its sensible gun control editorials, it must also reckon with the fact that by publishing a big, ugly, obtrusive ad for guns in the wake of a horrific, highly public mass shooting, it was party to a disgusting trend, one that it ought to be prevailing against by any means necessary.

Once again, we have a self-serving distortion of our vaunted First Amendment (which, via "Free Speech!," is getting closer and closer to the oppressive, calculated misreading of the second). The PD is choosing to view itself in the shoes of the U.S. government here. They believe that they must not infringe upon the free speech rights of their reporters, their readers and — for heaven's sake — their advertisers. But they're under no constitutional obligation to publish anything at all. They know this, of course. All they can do is "try [their] best to honor" the standards they've set, in due accordance with their commitment to Free Speech.

Which, fine. Not that a Facebook post like this one should be interpreted as anything other than crisis-mode PR. But still, the PD would be wise to recall that the First Amendment also, critically, defends the freedom of the press. And now would be a really wonderful time for Ohio's largest newspaper to summon some loud, nasty and even controversial speech, (uglier and more obtrusive, even, than its gun ad), in the service of a much greater good.