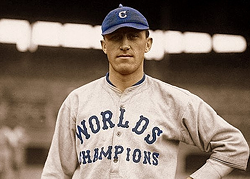 The jersey the Indians wore in 1921, the year after winning the 1920 World Series
You'd think the ALDS would've taught the experts a lesson. Against the Red Sox, nobody was picking the Tribe, what with Cleveland's depleted starting pitching and Boston's powerhouse offense.

Certainly, after the Indians made short work of Big Papi and Co., they weren't expected to hold a candle to the Blue Jays, whose big bats were expected to bring the Tribe's gassed bullpen down to earth. Anyway, Boston had been sputtering at the plate. Toronto had just embarrassed the Texas Rangers, the team with the American League's best record heading into the playoffs, and were piping hot.

But the Blue Jays couldn't deal with The Circumstances. Experts — local and national — were dismayed, though happy to chalk up the Indians' success to a good old-fashioned underdog adrenaline, to the notion that once October rolls around, anything can happen in baseball.

And yet the experts are back at it for the World Series, not recognizing that the Indians might be riding more than a wave of good fortune. Though a few daring dissidents have picked the Indians — two guaranteed wins from Kluber, they theorize, and two more cobbled together on the backs of the bullpen, thanks to Terry Francona's innovative (that is, extremely heavy) usage — the popular pick is the Cubs, who haven't won a World Series title since 1908.

Everyone believes this is Chicago's year, (an irony indeed in 2016, given that this has proven to be a year custom-made for precisely one town).

"The Cubs are the more talented bunch," explained R.J. Anderson, on CBS Sports. "Anything can happen over seven games, but when in doubt, take the better team."

The better team, he says.  Five out of six experts at CBS agreed with him. Only Dayn Perry picked the Tribe.

Over at Sports Illustrated, the results were nearly as lopsided. Four out of six experts picked the Cubs to win, with C.J. Nitkowski and Albert Chen playing devil's advocate, citing Cleveland's ability to leverage the "little things" over the course of the series.

ESPN, in its position-by-position comparison to determine who "has the edge" going into Game one, decreed that the Cubs had stronger players at Catcher, Starting pitcher, First Base, Third Base, Left field and Center Field. Indians were bestowed the edge at Second Base (Kipnis), Shortstop (Lindor), Right Field (Chisenhall), and Relief pitcher (Shaw, Miller, Allen). It was also allowed that Cleveland had a better DH in Carlos Santana, though the Cubs, being a National League team, don't play with one.

Both Bleacher Report and Five-thirty-eight picked the Cubs to win the series as well, though the statistical gurus at Five-thirty-eight did predict that the Indians have a 55 percent chance of winning Game one.

At Yahoo sports, not a soul picked the Indians to win the World Series. But in fairness, Yahoo published their predictions before the playoffs began, and not one of their experts picked the Indians to beat the Boston Red Sox. Four out of seven experts pegged the Tribe as 2016's "Disappointing Team" in the Playoffs.