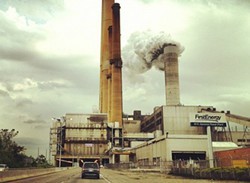 CHRIS DILTS / CREATIVE COMMONS
We mentioned last month the growing debate over whether FirstEnergy and other regional energy giants should be granted their requests for locked-in fixed-rate contracts for customers. The measure, termed a "bailout" by critics, would guarantee rates for the company's customer base and thereby maintain operations at aging coal plants.

The debate, in a sense, comes to Cleveland tomorrow when the final public hearing over FirstEnergy's proposal takes place at Cleveland City Hall (6 p.m., Room 216).

Last week's hearing in Akron drew a fairly even split between the 'for' and 'against' sides of this issue. About 100 people showed up, according to the Akron Beacon Journal. An excerpt:

Critics called the utility’s proposal unnecessary and costly and said it would force customers to subsidize some of its power plants through a surcharge on electric bills over the next 15 years.

Support for the plan came from a range of elected and labor officials stretching from Akron to the Ohio River.

All said they supported the plan because it would assure low-cost reliable electricity.