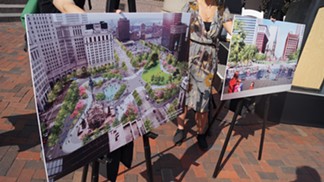 Sam Allard / Scene
The final $7.5 million in the funding campaign for Public Square's renovation has been secured.

Thanks to a "creative collaboration" between Cuyahoga County and Rock Ohio Caesars, (the company which owns and operates Horseshoe Casino), the $32 million construction budget is now at least officially spoken for. The much-anticipated redesign, brought to you by LAND Studios and nationally renowned architect James Corner and his Field Operations firm, will begin Monday morning.

City and county officials announced that County Executive Armond Budish has referred legislation to county council that will enable this significant bond issuance. The bonds will be repaid via a "repurposing" of Tax Increment Financing (TIF) from the Higbee Building, owned by Rock Ohio Caesars.

That TIF stuff is complicated, but it was authorized in 2002 by Cleveland City Council to incentivize developers to buy and renovate buildings downtown. (It was deployed to dramatic effect by the Maron Group for the E. 4th Project). The PD's Michelle Jarboe McFee, who owns the beat, has clarified the TIF specifics here.

Neither Jeremy Paris nor Cleveland's Economic Development Director Ed Rybka could say for sure whether or not this type of "repurposing" had ever happened before. Also, it's worth noting that county council hasn't yet voted on this, but Budish said afterwards that he wasn't expecting any trouble. Paris, too, said they wouldn't have held a press conference if they weren't confident.

But why would Rock Ohio Caesars (of all places) willingly forego $7.5 million?

"I really cannot speak for them," Paris said, "but this is their front yard. Len Komorowski has been involved with the Group Plan for a long time. We've met with Dan Gilbert, and they're excited about what's happening here. This is a tremendous civic commitment by them, and speaks to the nature of this partnership."

"Transforming Cleveland's Public Square into an engaging and vibrant destination will enhance the community and will make it an attraction for the region." Cullen wrote. "We applaud all of the public and private leaders that are dedicated to the city's tremendous growth and progress."

Sam Allard / Scene
The GCP's Joe Roman at the Mic; Tony Coyne and Armond Budish looking on; Jackson giving media the death stare.
A series of leaders took turns at the mic Friday morning — Group Plan chairman Tony Coyne, Mayor Jackson, Executive Budish, RTA boss Joe Calabrese, Greater Cleveland Partnership impresario Joe Roman, Downtown Cleveland Alliance prez Joe Marinucci, Jeremy "I feel like I should change my name to Joe" Paris — apologizing (along a spectrum of sincerity) for the upcoming year of traffic inconvenience and singing the praises of a new Public Square that really ought to be as vibrant and dynamic and catalytic as they're saying it will be.

"Today we are announcing that our downtown Public Square will be transformed," Budish said, in prepared remarks. "Things are changing in Cleveland and in Cuyahoga County. We're a region on the move. We have to look like the great city we are. We have to show the world during the Republican National Convention how great we are."

"And not necessarily to the Republicans," added Joe Roman, during his remarks. "We want to show off this space to the 15,000 media people — three times what we see at a Super Bowl — when they're in town that week, because that's why people will be coming to Cleveland so many times after that. I really do we believe we would've gotten this project done under any circumstances, but the RNC helped us focus."

If focus is what Roman wants to call it, fine. But the 2016 convention is certainly kicking the development frenzy into an ever-more lurid gear. Behind the scenes, and buried on page 14 of Friday's Plain Dealer, Andrew Tobias reported that Budish is expecting an official request for taxpayer support on a proposed $140 million Quicken Loans Arena overhaul "soon."

"[Budish's] impression was that the Cavs wished to complete the renovations before the Republican National Convention," Tobias wrote.

Not to invent connections where none exist, but this is perhaps notable: Dan Gilbert, Chairman of Rock Gaming, founder of Quicken Loans Inc. and majority owner of the Cavs, out of the goodness of his civic heart, quote unquote "foregoes" $7.5 million to contribute to a project that will undoubtedly redound to his financial interests: the value of the Higbee Building will surely increase due to the brand-new front lawn (and taxes on the increased value will go right back into TIF-renovations, McFee reports), not to mention the fact that new development projects and peripheral investments should be great for Casino business.

Projections aside, Rock Ohio Caesars is being painted as the hero here, the final hinge on which the Public Square funding rests and around which it vibrantly rotates. The news is celebrated, as these things are, via press conference. And I get it. It's exciting. The Public Square renderings really do look lush and the idea of a state-of-the-art public space — free for and accessible to everybody — is much more civically gratifying than a state-of-the-art sports facility, for example, which is accessible only to those who can afford tickets.

Nevertheless, count on Gilbert and Komorowski, if they haven't already done so, to leverage their Public Square beneficence in the service of securing $70 million in public dollars for the Q's cosmetic overhaul.