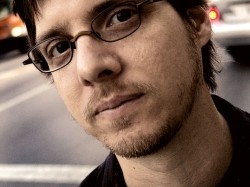 Brad Warner has practiced Zen for more than 20 years. He's become an internationally noted teacher of the spiritual discipline, but it hasn't eliminated his problems. Staring down a divorce and pondering an affair, the punk-bassist-turned-Zen-teacher had the idea for his new book, Zen Wrapped in Karma Dipped in Chocolate: A Trip Through Death, Sex, Divorce, and Spiritual Celebrity in Search of True Dharma. In it, Warner recalls his original inspiration.

"It would be a book that destroyed once and forever any myths anyone could hold about what Zen masters were or should be," writes Warner on page 131. "In its place would be a real-life-warts-and-all portrait of what a Zen teacher in the twenty-first century actually is." Then, true to his self-effacing style, he notes, "I knew I would fail at this."

Zen still hasn't made Warner a spiritual superman, but it's helped him relax and make some bold moves. As his previous books detail, Warner discovered Buddhism as an angry young Kent State student, when he was outgrowing the 1980s Akron-Cleveland hardcore punk-rock scene. A student of the Japanese language, he moved to Japan in the 1990s. After teaching English, he wound up working for the company that produces the superhero Ultraman, one of the country's biggest cultural icons.

Today, the Zero Defex bassist is technically a Zen master - though he doesn't like to use the term, especially in reference to himself. His ingrained punk-rock values and iconoclastic experiences on the international Zen circuit have taught him that anyone who promotes himself a master of anything is probably full of shit. Or at least, he's exactly as human as the average non-meditator who's never even contemplated enlightenment.

True to form, the karma reference is the only time in the conversation that Warner drops silver-plated Zen lingo. His first book, 2003's Hardcore Zen: Punk Rock, Monster Movies & the Truth About Reality, spent more time examining Godzilla and music than Buddhism. The book distinguished between Buddhist religious traditions and the meditative practice of zazen: In Zen meditation, practitioners simply sit on a cushion, legs crossed, breathing and staring at a wall, for five to 20 minutes a day. Staring at a wall - instead of screaming at it - was a big change from punk rage, but it hooked him quickly.

"I think I was looking for the same thing in punk and hardcore as I was in Zen," says Warner. "I thought [punks] weren't really taking it far enough. And I wanted to take this questioning attitude all the way, not just questioning Reagan and society, but questioning yourself."

Warner's 2007 book, Sit Down and Shut Up: Punk Rock Commentaries on Buddha, God, Truth, Sex, Death, and Dogen's Treasury of the Right Dharma Eye, used Warner's distinctive modern-day frame of reference to examine a 13th-century Buddhist text. In the new Zen Wrapped in Karma, he examines some of the mental heavy lifting that goes into the practice of Zen. Meditating isn't all chilling out and finding harmony with the universe. Warner relates the difficulty he still experiences at an all-day meditative retreat:

"You have no idea what in God's name ever made you consider signing up for such a thing," he writes. "But you're stuck here, way the hell out in the middle of the woods with a bunch of nerds who think it's really cool to be all 'Zen' and shit for a week. Fucking assholes. Why don't they all just go die? … You think nobody else feels like this. But they all do."

Unlike his previous two published books (he's also written three unpublished science-fiction novels, one of which he thinks is pretty good), Zen Wrapped in Karma is more a memoir than a spiritual manual. If you're not into punk rock, meditation or Ultraman, it's definitely the most accessible.

"I'd say the new one is the one [to start with]," says Warner. "It's always my goal to make it about real life. And that's what I tried to do, to write a book about how this Zen practice fits into real life."

Brief chapters present rock 'n' roll episodes, like a recent Zero Defex reunion and a visit backstage at Ozzfest. Warner leans on Zen as his marriage crumbles, a kidney stone passes, his grandmother dies and a dream job turns into a Kafka-esque nightmare. The Zen master does not achieve unity with the universe. He writes off meditative visions as fantasy; according to Warner, the principal benefits of sitting zazen are lowering your aggravation levels and learning not to be a dick.

"At this point, going out in the morning without doing zazen would be worse than going out in the morning without brushing [my] teeth," says Warner. "You brush your teeth for yourself, to feel good - but you also brush your teeth for other people, so that you don't smell bad and offend them. You do your practice because that good feeling you get extends outward in your interaction with people. There's this idea in Buddhism about saving all beings. It's not about rescuing them, but saving them from all the shit I would do to them."