On Monday, Cleveland will host a visit by Mad as Hell Doctors, six Oregon MDs who are traveling cross-country in their “Care-a-Van” — a white 1986 Winnebago named “Winnie” — to Washington D.C. to promote the cause of single-payer health-care reform. They’ll present their case in a free, open-to-the-public townhall meeting at 7 p.m. at Laborers’ Hall (3250 Euclid Ave.).

Traveling ahead of them in a Subaru and accompanied by a giant puppet and various props are Jared and Kajsa, a couple from Washington state, representing the Backbone Campaign. They’re staging street theater a few days ahead of each Mad as Hell Doctors appearance to trump up interest. 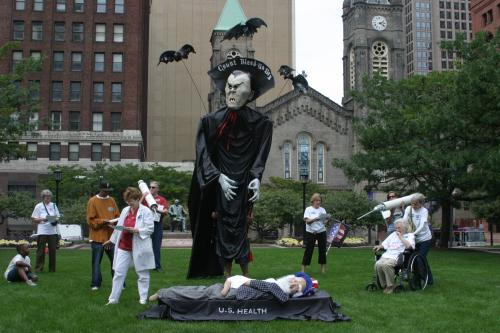 On Friday they were at Public Square, joined by local members of Ohio SPAN (Single Payer Action Network) and Jobs With Justice. While Count Bleed-Ya-Dry, a puppet representing the evil insurance companies, loomed over them, the amateur actors, impersonating doctors and patients, brandished giant hypodermics with dollar signs on them and recited statistics about the cost and outcomes of health care in the U.S. The piece concluded with the Count being vanquished by health-care reform, while Kajsa sang a song urging the adoption of a single-payer health-care system, sung to the tune of “Time Warp” from The Rocky Horror Picture Show.

The script certainly didn’t rival Shakespeare or even the propaganda plays of Clifford Odets, and these actors probably aren’t going to be onstage at the Cleveland Play House anytime soon. But they did manage to attract some attention and strike up a few conversations with the mid-afternoon bench sitters.

After Cleveland, the doctors will stop in Pittsburgh before their final stop; a rally in Washington D.C. September 30. For more information about Monday’s event, call 440.333.7007. — Anastasia Pantsios