Quicken Loans Arena, So Badly In Need of Renovations to Remain Competitive, Had Record-Setting 2017 in Attendance and Shows 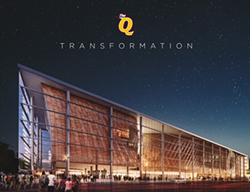 Courtesy: Cleveland Cavaliers
The Quicken Loans Arena renovation deal was sold to voters, in part, on the basis of the arena’s presumed obsolescence. Cavs CEO Len Komoroski and others repeatedly stressed throughout the proceedings that in the near future — the quote unquote “short-term years ahead” — the Q would no longer be able to compete with other venues in the region.

Major touring acts would pass over Cleveland for the likes of Detroit, Buffalo, Cincinnati or Indianapolis, the argument went. Local taxpayers, then, saddled with a decrepit concrete monstrosity, would miss out on hundreds of thousands of dollars in tax revenue.

But if obsolescence is impending, there is no sign of it yet. In 2017, the very year the deal was approved by both the Cuyahoga County and Cleveland City Councils despite enormous citizen opposition, the Q logged the highest concert and event attendance in the arena’s history.

With notable performances by Lady Gaga, Coldplay, Tom Petty and the Heartbreakers, Bruno Mars and Eric Church, the Q ranked 18th in the United States and 40th worldwide for venues with the highest ticket sales, per a press release. These rankings were a marked improvement over 2016, when Championship runs by both the Cavs and the Monsters, not to mention the RNC, limited potential concert bookings.

In 2018, there is no shortage of major acts on the horizon as well: Pink, Justin Timberlake and Shania Twain are all scheduled to perform in the year’s first half.

These rankings, and the upcoming big-ticket acts, are reported with euphoria by the Q’s marketing division with little regard for the rhetoric Komoroski and co. deployed to sell the deal less than a year ago. Has everyone already forgotten?