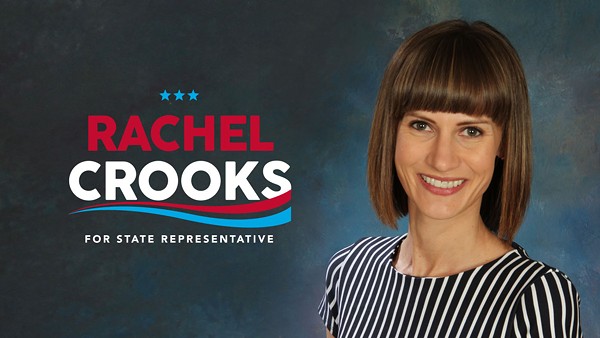 Courtesy of Rachel Crooks for Ohio

Rachel Crooks was working as a receptionist for the real estate company Bayrock Group in Manhattan's Trump Tower in 2005 when she claims she encountered Donald Trump by an elevator in the building. The two shook hands and he allegedly refused to let go, beginning to kiss her on the cheek and mouth. The New York Times published a full interview of her accusations, "It was so inappropriate," Crooks recalled. "I was so upset that he thought I was so insignificant that he could do that."

Horrified that a man like this could be elected to the most powerful position in the United States, Crooks ran for the Democratic nomination for Ohio's 88th district, in the Sandusky area. Crooks ran unopposed for the nomination, and will go head-to-head against incumbent representative and Assistant Majority Whip, Bill Reineke.

Crooks is one of at least 19 women to accuse President Trump of sexual misconduct. As per usual, Trump vehemently denied these accusations on Twitter.


A woman I don’t know and, to the best of my knowledge, never met, is on the FRONT PAGE of the Fake News Washington Post saying I kissed her (for two minutes yet) in the lobby of Trump Tower 12 years ago. Never happened! Who would do this in a public space with live security......


Crooks would later reply to Trump by announcing her run for office.


Please, by all means, share the footage from the hallway outside the 24th floor residential elevator bank on the morning of January 11, 2006. Let’s clear this up for everyone. It’s liars like you in politics that have prompted me to run for office myself. https://t.co/ir7EEKoXRU https://t.co/GmkkZ5jUc7


Crooks has a tough battle ahead of her if she wants to dethrone Rep. Reinke, but her ability and willingness to speak against the most powerful man in the world is pretty inspiring.

For more information on Rachel Crooks, check out her campaign video below.


I'm not afraid to speak up for what's right even when it's against one of the most powerful men in the world. Watch my bio video, find out what I stand for, and please contribute to my campaign to help me represent HD 88 in the Ohio House. Donate here: https://t.co/MPSiDXkCtR pic.twitter.com/RJ2H747XdQ