Rebuilding a More Equitable Economy in Northeast Ohio After the Pandemic 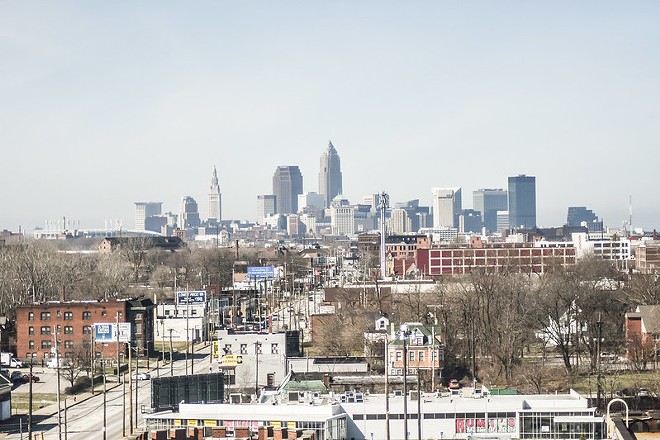 Erik Drost
When he learned the covid-19 crisis would cause people to lose jobs and schools to close, Walt Patton called six close friends and got to work. They set up a volunteer distribution network at Friendly Inn and Garden Valley Neighborhood Home — social service agencies in the Central and Kinsman neighborhoods of Cleveland — delivering brown paper bags of rice, green peppers, and salami to nearby residents.

“This is a team effort,” said Patton, who was born and raised in Central. “I live here and I have to deal with this,” referring to the effects of the crisis. “So it’s an important thing for me to collaborate with people with the same passion. Speaking it into existence is dope.”

Across the city, hundreds of people like Patton have volunteered through new and existing groups to provide direct support for neighbors vulnerable to the physical, economic, or psychological threats the crisis poses.

Patton’s spirit of cooperation is a source of hope in the time of covid-19. It’s also a north star for the world we want going forward.

Before the coronavirus, Northeast Ohio, like the rest of the country, was already sick with the pre-existing crises of racial and economic inequality, the result of growing corporate wealth and power.

The coronavirus crisis is a unique opportunity to rebuild a more just and resilient economy in Northeast Ohio by redistributing that wealth and power down through collective ownership. Ownership by workers, community members, and local governments takes the spirit of cooperation that motivates Patton and others responding to covid-19, and uses it to confront the racial and economic inequality of our region.

Worker ownership challenges inequality by creating democratic businesses. Fifteen workers of Berry Insulation became worker-owners this winter when they purchased the company from founder Martin Berry through a partnership with the Cleveland-based Fund for Employee Ownership. Compared to firms with traditional ownership, worker-ownership is associated with higher productivity, wages, and profitability. Today’s movement to ‘think outside the boss’ builds on a long history of multi-racial labor organizing for fair wages and workplace protections and worker ownership.

Similarly, community ownership promotes equality by empowering neighbors to do the hard work of making collective investments and sharing important decisions, such as what to do with profits. Cleveland Owns, the nonprofit on whose board we serve, is working with residents across the region to build community-owned solar and food enterprises. In the time of covid-19, one Zoom call at a time, neighbors are acting with even more urgency to take control of economic decisions that affect them, and build together what they can’t build alone.

Public agencies, formed in a spirit of cooperation and owned by the people they serve, are another form of collective ownership Northeast Ohio must take seriously if we are to rebuild a more equitable economy. With proper accountability, public agencies are uniquely capable of providing essential public goods such as electricity, gas, water, and broadband internet — even banking, as North Dakota’s 100-year-old public bank has proven.

Worker, community, and public ownership effectively challenge inequality because they are structures based on accountability. In contrast, traditional corporate-first economic development strategies are anything but. Twenty thousand Clevelanders petitioned to withhold City and County money from upgrading Quicken Loans Arena in 2017 because they objected to public money going for private gain. A failed 2018 proposal to bribe Amazon to locate its headquarters to Cleveland, and a recent $13.5 million cash grant sweetheart deal for Sherwin Williams’ headquarters relocation, show local economic policy is still set by cronyism and deference to the wealthy, rather than accountability to residents.

Like all truly cooperative efforts, accountability is a core part of Patton’s work in Central. When the free home delivery service he and friends promoted started two days later than expected, Patton said, “the residents held me accountable. They are depending on us to get things done.”

While he says taking responsibility for the wellbeing of his neighborhood can feel like a lot of pressure at times, Patton finds strength working with friends and volunteers. “People showing up and helping is very important to me,” he said. “I see this effort going beyond the crisis.”

Now is our chance to do the same.

Mordecai Cargill, Adam King, and Jonathan Welle are on the board of Cleveland Owns, a nonprofit cooperative incubator; Jonathan Welle also serves as Executive Director. They can be reached at [email protected]